A brief history of a British must-have… 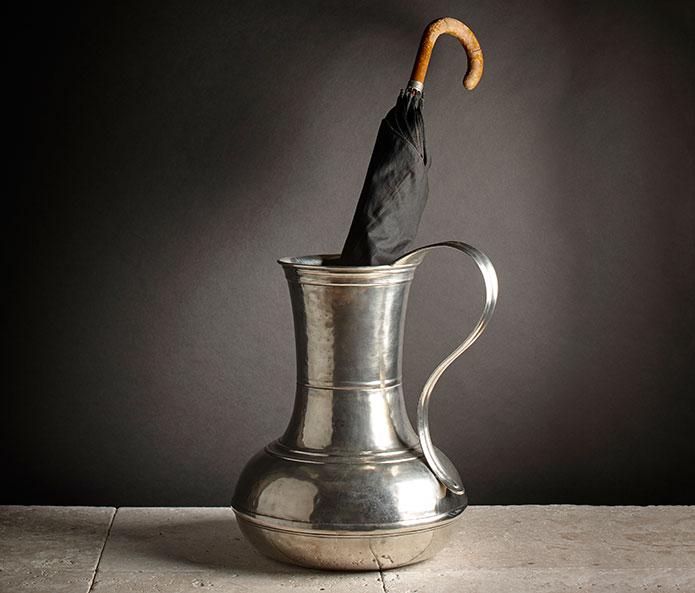 Although found the world over, the umbrella is a quintessentially British necessity. As a nation, we are known the world over, due to our inclement climate, for our almost daily ritual of commenting, speculating and complaining about the weather and the resultant habit for a lot of us of carrying an umbrella, albeit in a handbag, briefcase or boot of the car, no matter what the season is supposed to be.

As a simple object it has become an icon of Britishness, so much so that the humble umbrella has become part of our national consciousness and umbrellas have historically been used in our maritime climate to take cover and shelter from incessant rain and lashing wind for the last few centuries, with Fox umbrellas being the iconic British brand. However, its origins are the exact opposite… 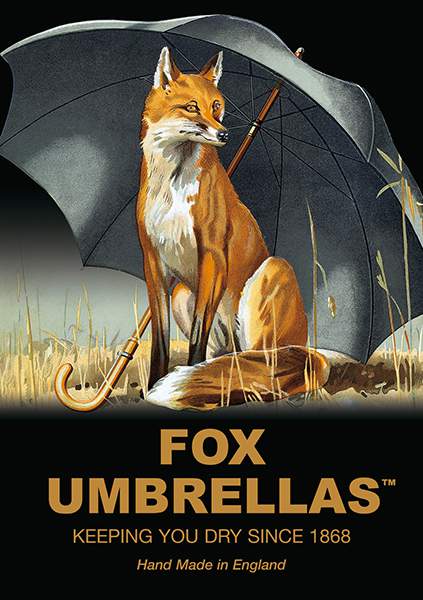 The word umbrella, known as umbraculum to the Romans, comes from the Latin ‘ombra’ meaning shade or shadow; the early forms of umbrellas allowing respite from an unforgiving sun, which has provided other related terms – such as ‘sombre’ – being under a shadow, and ‘sombrero’ – a shady hat. Many cultures, from ancient China, to Assyria and Etrusca, used umbrellas as a status symbol, with those important within royality, religion and political shielded by loftily held umbrellas, These early umbrellas were made of skin or leather, and were still of similar design in Renaissance times, and were thought to have been used in Spain and Portugal within the same period, which would explain how they were seen within the New World at the same time. For example, Daniel Defoe references them – Crusoe recreated an umbrella like those he has seen in South America, and subsequently, one type of umbrella has become known as “The Robinson.”

And in Italy the ‘ombrello del pastore’ was a popular accessory with shepherds in the mountains, an occupation where they could require shelter from both heavy rain and strong sunlight during their watch, the livestock so precious that they could not abandon them if the weather became too wet, or too hot. Umbrellas became such an important part of the life of a shepherd that many knew how to make and repair umbrellas, and they have become quite an iconic Italian product. There is in fact an umbrella museum in Gignese, Piemonte, and there are a number of luxury Italian umbrella makers from the 1800s, still trading strongly, such as Maglia Francesco and Mario Talarico. 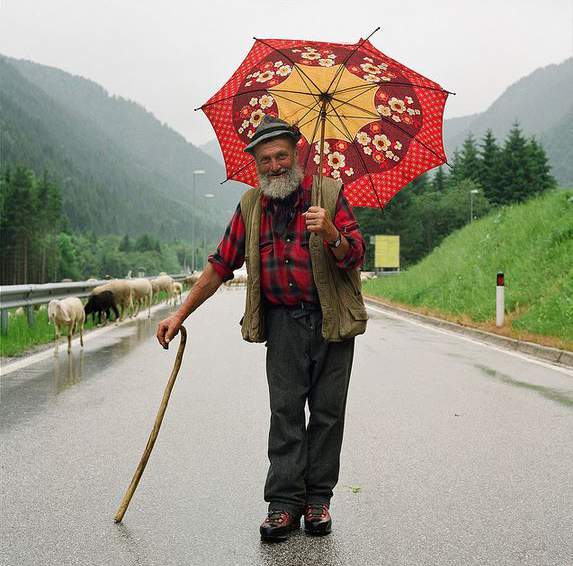 By the 18th Century, in the inclement climate of Northern European countries, it became the norm for well-off women to carry umbrellas against the rain. These umbrellas were typically made of feather, to replicate the plumage of water resistant birds; pretty though not particularly practical – pretty useless in fact. At that time, men were rarely seen with umbrellas, however, as it was viewed as an effeminate accessory; yet times were changing, albeit very slowly, and men would sometimes use umbrellas, yet only under the cover of darkness, and whilst wearing a mask! By the end of the 18th Century, umbrellas for men had been popularized by writer Jonas Hanway; he claimed his delicate constitution justified using an umbrella, so English gentleman came to call their umbrellas ‘Hanways’.

After feathers, oiled silk was used, yet this was not particularly practical either; these umbrellas were heavy and difficult to open and close, so eventually silk and gingham became the material of choice, which were lighter and so easier to carry, often with a ring on the top to be held by ones finger and be hung upon a peg. Throughout the 19th Century, the umbrella was seen as practical and decorative accessory with specialist handles of bone, ebony and ivory, and ornate shades, with the first umbrella shop; James Smith & Sons, opening in 1830, and still in existence today in New Oxford Street London.

The Victorian era also saw the golden age of the parasol – the umbrella’s cousin – although ancient in design, it was extremely popular due to the fashion at the time for female fair complexion. Pale skin was seen as a marker within women of both beauty and class. Refined ladies did not have to work outdoors, unlike their working class counterparts; their pale complexions a representation of their cosseted existence. The parasol was a fashionable accessory, into the 20th Century, along with the lace handkerchief and fan, all of which were cleverly used as aids to flirting within high society. 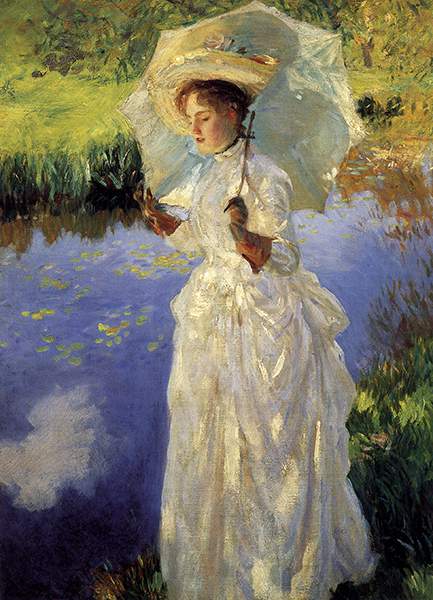 Today, umbrellas have evolved into the stainless-steel framed versions with durable nylon and polyester covers, we are all familiar with. Communal images of the umbrella in British society abound; city gents with brogues, bowlers and brollies splashing through city picture puddles of reflected city motion and light; young lovers strolling idealistically under a romantically shared umbrella, oblivious that either they are still getting wet, or, the rain, in fact, has stopped; die-hard golfers & fevered fishermen bravely brandishing vast canopies for shelter in the great British outdoors; wet & windswept walkers, making the most of a rainy day, wrestling with strained, buffeted and quick-as-a-flash inverted contraptions, which sometimes are beaten and broken by the British weather (depending upon their pedigree), and are then ceremoniously discarded as a jumble of twisted frame, torn material, dissatisfaction and disappointment into the nearest bin, as the typically British resignation of the inevitability of a good soaking is accepted.

Umbrellas of varying style and quality can now be purchased, from cheap & cheerful ones from motorway service stations and pound shops, through to bespoke handcrafted versions from traditional workshops like Fox Umbrellas, London. Whether it is modest purchase from the local department store, a throw-away buy from the market stall on a stormy day, or a long-coveted heirloom investment from a specialist manufacturer, every British household, to cope with our inclement climate, quite often has an entire selection of umbrellas in the hallway, porch (sometimes even in a proper stand) or boot of the car; generous golf ones, for the not-so-fair fairway or family huddles in puddles, stylish & pretty ones for soggy shopping trips, sober ones for wet workdays, sombre ones for reverent & respectful occasions and bright & funky ones for child’s play whether it is raining or not…Which ones have you..? 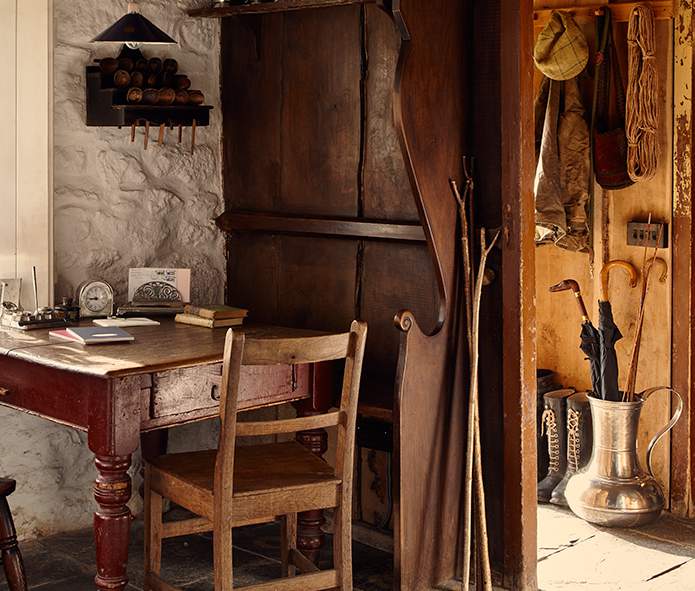