The story behind the tradition, from ancient Romans, modern-day Rome and beyond…

Why do we exchange chocolate eggs at Easter, and encourage children to search the garden for eggs left by an elusive rabbit..? And what on earth do chocolate eggs and bunnies have to do with Jesus…? Well, the celebration of Easter is not actually exclusively a Christian ritual, as the word Easter can be traced back to the worship of Eostre. Eostre, of Germanic origin, was thought to have been the pagan goddess of the dawn (from the word Aurora) as well as the coming of Spring and its associations with fertility and new life. During these ancient festivals of Eostre and Springtime eggs were widely used within celebrations.

Since ancient times, the egg has symbolised fertility, new life and rebirth, especially relevant in the Springtime as animals start to give birth to their young and there are signs all around to show that Spring is here; fields full of lambs, songbirds tending their eggs in their nests, and hens laying regularly again after the dormancy of the winter. Eggs have been considered special for millennia, and the practice of using eggs in celebration and ritual can be seen over many thousands of years, for example Ostrich eggs complete with elaborate decoration that are 60,000 years old have been found in Africa. 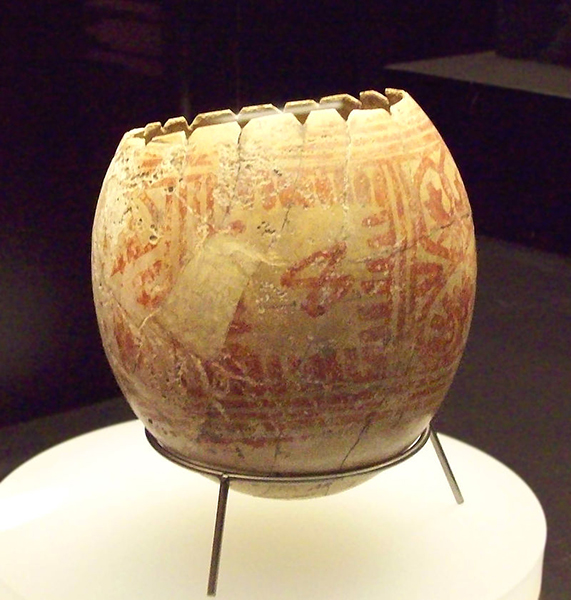 So, long before Christianity adopted the egg as a part of its Easter traditions, mankind has associated new beginnings with the egg and the egg has become a universal symbol of new birth in the Springtime. The Romans had a saying omne vivum ex ovo, which means “all life comes from the egg”, and in ancient Rome eggs decorated with vegetable dyes using onion skins, beets and carrots were given as gifts during the Spring festivals to celebrate the end of the dark days of winter and the coming of Spring with all its brightness, hope and life.

Historically, within the Christian faith, eggs, along with meat and dairy products, were traditionally not eaten during Lent as part of a period of self-imposed abstinence for forty days before celebrating the most important time in the Christian Calendar; Easter. The last eggs consumed before Lent were often in the form of pancakes or the like. During that period chickens would have started to lay again, so the glut of eggs accrued during those forty days would traditionally have been hard-boiled in order to preserve them until Eastertime and were often decorated and given as gifts to be enjoyed on Easter Sunday. 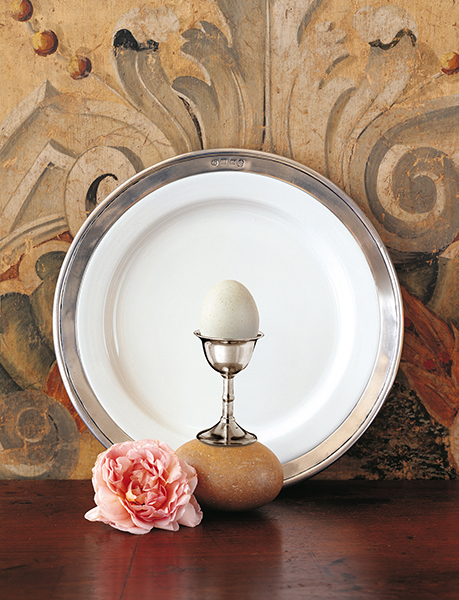 There are still traces of this practice today, and it is still customary during Easter celebrations to use eggs as part of the Easter meal, such as devilled eggs, or a special meatloaf with eggs, to make use of the surplus of eggs saved up over Lent.

In those days, the eggs that were kept back for gifting, rather than used in cooking, were traditionally coloured red, as, according to tradition, Mary Magdalen travelled to Italy to spread the word of the resurrection following the death of Jesus, and when meeting the Emperor Tiberius Caesar, the egg she had brought him as a gift miraculously turned red, symbolising the blood of Christ. 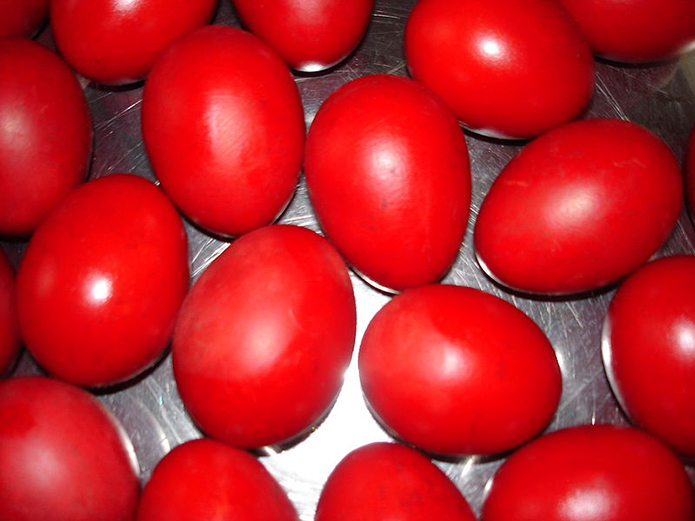 At the end of the 19th Century and during the 20th Century, as chocolate became more easily mass-produced and affordable, the giving and receiving of brightly coloured chocolate eggs took over from traditional painted hard-boiled ones, and has since become the norm in many societies, Christian or otherwise, as people enjoy the ritual of giving and receiving eggs at Eastertime. Easter eggs are also known as Paschal eggs after the Latin for Pasche meaning Passover which relates to equivalent time within the Jewish faith. In Italy especially, and not surprisingly due to how much chocolate is an important part of everyday life, Easter eggs range from tiny solid milk chocolate ones to massive, showy hollowed out eggs containing sometimes quite elaborate gifts.

In fact, it has been increasingly commonplace as Italian customs evolve to hide an engagement ring, or even a set of car keys within the egg! Even if not all gifts are quite so indulgent, the Italian eggs will often be wrapped in foil or cellophane and most will have at least a decorative ribbon, often with a massive bow, and will be displayed in shop windows from stylish city boutiques to tiny village shops tempting passers-by to indulge. In fact, some coffee shops will raffle off a massive egg for charity, with the lucky winner walking away with a huge egg! 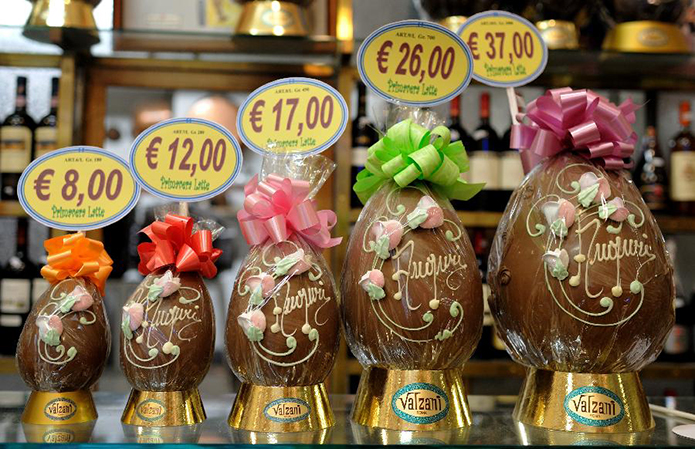 In Britain, Easter Eggs dominate the supermarket shelves during the run up to Easter with all of the main confectionary brands offering their branded eggs. The specialist British chocolatier, Lick the Spoon, specialising in handmade luxury chocolate, created a special range of chocolate Fabergé Eggs for Harrods, including a giant Chocolate Fabergé Egg inspired by the beautiful intricate work of the jeweller Carl Fabergé, who created a series of Easter gifts for the Russian Imperial family in the late 19th and early 20th Centuries.

Beyond eating chocolate eggs, simple or extravagant, other Easter traditions involving eggs are practised around the world. One such tradition is egg-rolling, which is simply rolling hard-boiled decorated eggs down inclines, ranging from gentle or steep, depending on your nerve, and is especially popular in Northern England and Scotland, or it can simply be a case of sedately nudging an egg with a spoon across a flat surface, found more commonly in the USA – where it has even been witnessed across the immaculately manicured White House lawn!

Egg-tapping, or “egg dumping” or “egg jarping”, is another popular Easter ritual, where, a little like the game of conkers, hard-boiled eggs are pitted against each other to see which one breaks first! This quirky but traditional past-time is also found across Europe, where in Italy, for example it is known as Scuccetta and can involve an elaborate tournament resulting in either the winner eating all the eggs, or the losers allowed to eat their defeated eggs, depending upon the local custom. 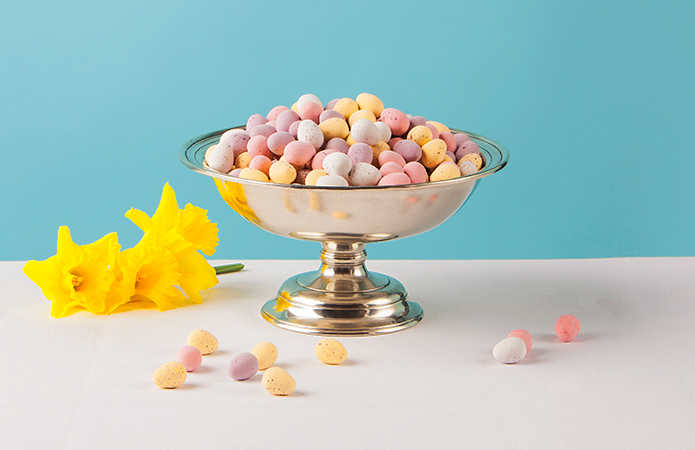 Easter egg hunts are also an increasingly popular tradition, and can be enjoyed in many countries, from Europe, especially Eastern Europe, to the USA and beyond, where chocolate eggs are hidden all around a garden for the children to hunt and collect. In Germany, this outdoors tradition of egg-hunts is often complemented by bushes and trees being completely decorated with eggs. 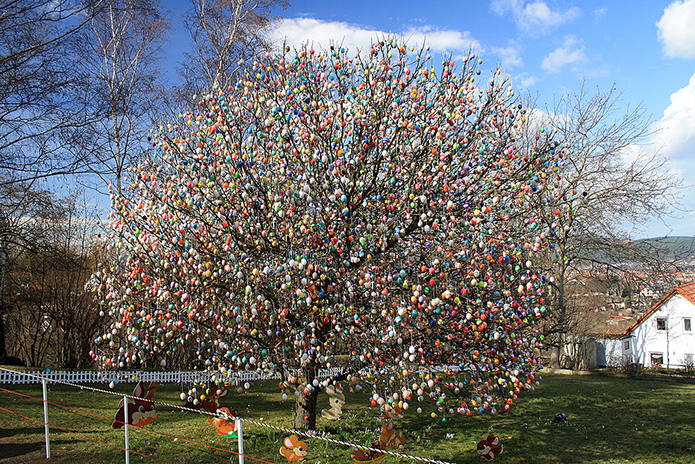 The tradition is that the eggs have been delivered by the Easter Bunny, not a reference to be found in the Christian annals, but instead dating back to pre-Christian Germany where a rabbit or hare was said to have presented to Eostre with a humble yet precious gift, an egg, and thus continued within all celebrations of new life and rebirth, pagan, Christian or otherwise…

Whatever tradition or not you follow, we hope you have an Easter egg, or two, to nibble this Eastertime!