Learn about the origins of Pancake Day, otherwise known as Shrove or Fat Tuesday.

Pancake Day in Britain and other English speaking countries is also known as Martedi Grasso, in Italy, and Mardi Gras, in France, and can be literally translated as ‘Fat Tuesday’. This day is marked in slightly different ways depending upon where you are from, but traditionally as a Christian celebration and a time for eating, but that is not why it is called Fat Tuesday! Instead, this is because this day marks the end of traditional feasting celebrations of the Christian calendar during Epiphany, culminating in the final night of festivities before the start of the fasting period of abstinence during Lent, which starts on Ash Wednesday. Fat Tuesday is traditionally the day when any remaining rich and fatty foods were eaten, as well as any remaining meat, after which these indulgent foods were traditionally forbidden until Easter.

Extended celebrations throughout Epiphany concluding on ‘Fat Tuesday’ are commonplace in Italy & France, as well as English-speaking countries. In fact, the Italian word ‘carnevale’ translates literally as ‘to remove meat’ and has subsequently become the universal word ‘carnival’ meaning celebration. Italian ‘carnevale’ celebrations usually begin on the (Fat) Thursday the week before Fat Tuesday, and, in Milan, it is customary to extend the carnival celebrations even further to conclude on the following (Fat) Saturday, which is in fact already four days into Lent!

These celebrations can be compared to the more restrained Pancake Day supper customarily upheld in Britain on what is traditionally known in English speaking countries as Shrove Tuesday. The history of Pancake Day and the relevance of Shrove Tuesday actually originates from the old English verb ‘shrive’ meaning ‘to confess’, which relates to contemplation and self-reflection which also formed part of the preparation for Lent in medieval times. It is customary to celebrate Pancake Day in the United States, no doubt inheriting the Shrove Tuesday custom from the British, however, in New Orleans in particular, no doubt from its French influence, Mardi Gras is celebrated, and it is traditional to stretch the Mardi Gras season from the twelfth night, the start of Epiphany on the 6th January, all the way to Shrove Tuesday with back-to-back celebrations! And of course, depending on the Christian calendar for that particular year, Shrove Tuesday can be as late as the 9th March!

Whilst British Shrove Tuesday celebrations may lack the parades, floats and spectacle of Mardi Gras, we do still celebrate the day, but it is always in a far more restrained way, but fun all the same. One iconic Pancake Day celebration most of us will be familiar with is pancake racing, often whilst holding a frying pan complete with pancake, and pancake races still take place through the streets of Britain today. This strange tradition is thought to originate from 15th Century England, the same century when the earliest pancake recipes in Britain were recorded (dating back to the 1430s). Within the history of Pancake Day, legend has it that in 1445, in Olney, Buckinghamshire, a peasant woman was at home frying pancakes on Shrove Tuesday when she heard the church bells ringing, summoning everyone to attend the Shrove Tuesday service. On realising she would be late, she ran straight to the church, with her apron on, frying pan still in her grasp, and a cooked pancake within it!

Another Pancake Day custom we all recognise is the tossing of the pancake. The tradition of tossing or flipping pancakes in the pan is centuries old, as demonstrated within an early 17th Century text, Pasquil’s Palin, 1619: “And every man and maide doe take their turne, And tosse their Pancakes up for feare they burne“. Tossing the pancake is still very popular and is always a test of the cook’s nerve, and the strength of their forearms, and many cooks tend to err on the side of caution and use a spatula to flip them.

The customs and celebrations associated with the history of Pancake Day, therefore, may last a day, days or even weeks, but throughout there is a commonality in the pancakes consumed around this time of year. The staple ingredients within a pancake recipe are thought to be significant to the Christian calendar during the period of Lent and Easter, with eggs symbolising creation, flour meaning the staff of life, salt associated with wholesomeness and milk representing purity.

Whatever the reason, be it faith and religion (although the traditional Christian abstinence over Lent is less practised than the past), a respect for tradition or simply because of a passion for parties and pancakes, this culinary custom is observed in many countries, especially Britain, Europe and the Americas. Having said this, pancakes can be found all over the world, although the shape and structure depends on geography and culture. It is thought that pancakes were the earliest and most widespread cereal food eaten in prehistoric societies, and a version of the pancake can be found across all of the continents in one form or another, from exotic sounding Injera of Africa and Serabi of Indonesia to the more familiar sounding Crêpe of France and Crespelle of Italy; all have the similarity of being concocted from modest ingredients and made quickly and easily.

So, whether they are Italian Crespelle, wafer-thin French crêpes, British pancakes, or their thicker American cousins, we all love a pancake, and a particular favourite in our household is the All American pancake with maple syrup and pecans – for sweet tooths with a nutty nod to healthy… 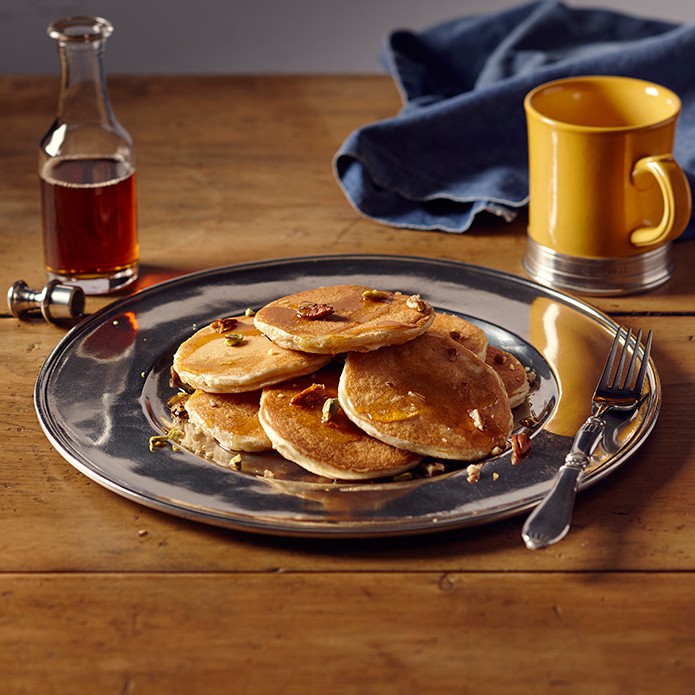 1. Melt the butter over low heat, then leave to cool.

2. Divide the egg whites from the yolks. Put the whites to one side.

3. Pour the egg yolks in a bowl and whisk, then add the melted butter at room temperature and milk and continue to whisk until thoroughly mixed.

4. Add sifted flour and powdered yeast, and mix to form a smooth batter.

5. Gradually add the sugar to the egg whites and whisk until white and fluffy.

6. Then, gently add the sweet egg white mixture to the batter.

7. Heat a non-stick frying pan (the thicker the base the better) gently, if it is too high the pancakes will brown too quickly and there will not be enough time for the yeast to rise – if necessary, grease the pan with a little butter to using kitchen paper.

8. Pour one ladle of batter into the centre of the pan.

9. When bubbles begin to appear on the surface the base will be golden, turn it on the other side with a spatula (it is safer than tossing). Check when browned, remove, keep warm, and continue until the batter is used up.

10. Serve the pancakes hot, sprinkled with maple syrup and pecans

This recipe makes 12 pancakes, but, of course, you can double or even treble up if feeding a larger group or just feeling greedy. In most households pancakes are so addictively delicious that the cook simply can’t make them quickly enough, with “Me next!” chanted repeatedly from the dinner table… Pancakes should not only be indulged in on Shrove Tuesday, as pancakes make brilliant breakfasts or super suppers all through the year.