As Halloween is upon us again, pumpkin and parmesan soup is the perfect way to satiate everyone after high jinks at Halloween. Halloween has always been a mixture of superstition and celebration, from its origins as a Celtic festival (Samhain), when, on 1st November, the end of summer and the harvest was celebrated ready for the beginning of winter, which, with its cold, dark, harshness has always been a time of year often associated with decay and death.  The night before this special day was traditionally marked as a time when the dead returned to earth to cause trouble, and so, gathering together, dressing up and lighting fires upon this night comforted people before the long hard winter began.

Fast-forward to Roman times and many Celtic kingdoms had been conquered and incorporated into the Roman Empire, and the traditional Celtic Samhain was merged with two Roman commemorations occurring at that time of year; the passing of the dead (Feralia) and the honouring of Pomona, the Roman goddess of fruit & trees. Fast-forward once more, and still with Italian roots, in the 8th Century, Pope Gregory III designated 1st November as a day to honour all saints and martyrs, All Saints Day, which again incorporated the ancient Celtic traditions of Samhain, and the night before became known as All Hallow’s Eve, and later became universally known as Halloween.

Halloween as we know it today, has become more of a social tradition and less of a religious ritual, and a distinctly American version of Halloween has since emerged.  America has taken Irish and English Halloween traditions carried over the Atlantic, especially the concept of  ‘trick-or-treating’, where youngsters dress up in costume and walk from house to house asking for food or money in return for not playing a trick.  This is, in fact, a modern version of ‘All Souls’ day’ parades in England where the poor would beg for food and in return they would promise to pray for the kind benefactor’s dead relatives.

Halloween is also celebrated in Italy, but not to the same extent as the pagan-turned-religious-turned-social ritual which both Britain and America has embraced with such great ghoulish gusto. Italians still traditionally celebrate All Hallow’s Day on 1st November, so marking All Hallow’s Eve on the 31st October is a logical evolution in social ritual, and in many regions both days are celebrated as national holidays, and more recently many younger generation Italians dress up and ‘festa’ (party) and perhaps even ‘fester’ if the costume is particularly ghoulish!

The iconic symbol of Halloween – the pumpkin – is seen as an American tradition, a New World food introduced to us in the 15th Century, but pumpkins are also traditionally grown in Europe. In Northern Italy, the countryside around Venice is famous for producing bumper crops of pumpkins – or ‘Zucca’ – which would last households through the winter months. Because of this, pumpkins have historically played a role within Italian autumn ritual, as it has been traditional to use pumpkins to decorate homes, especially in rural areas, because they seen as good luck for a fruitful harvest.

Italian-grown pumpkins are generally more characterful than the generic Cucurbit variety we associate with Halloween celebrations in the US and Britain; from suca baruca, which are warty like a witch’s nose, to casperita, a ghostly shade of white, so lend themselves perfectly to Halloween celebrations. And, more importantly to the Italians, of course, is the cooking rather than the carving and displaying of the pumpkin, and nothing could be simpler and more satiating than a bowl of pumpkin and parmesan soup – rustic Italian style… 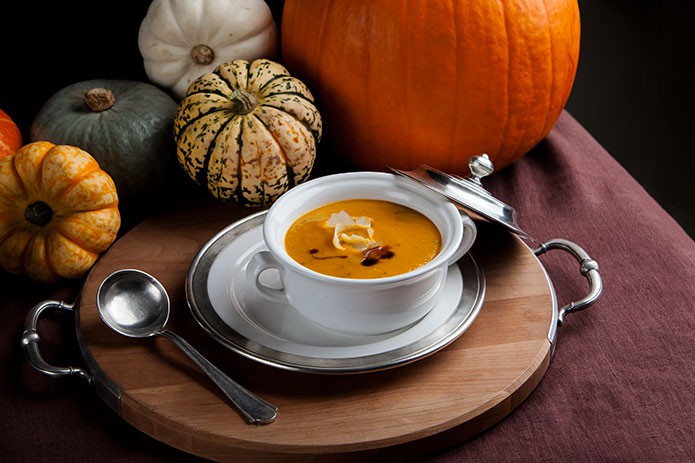 1. Remove the top cap of the pumpkin and remove all the seeds and filaments, creating a ready made tureen complete with lid.

2. Melt the butter over a medium heat, and then add chopped celery, parsley, basil and thyme.

4. Fill the pumpkin ¾ of the way up with broth, sautéed herbs and vegetables, peeled garlic and grated cheese.

6. Stir well and cover the pumpkin with its cap.

8. Remove the pumpkin from the oven, carefully remove the top and allow to cool.

9. Remove the garlic and then carefully scrape the pumpkin off the sides with a serving spoon and mix it carefully into the broth to make a puree – if this results in too thick a puree add some more hot vegetable stock to it.

10. Serve hot, with a couple of drops of balsamic vinegar and a couple of shavings of Parmigiano Reggiano – Pumpkin & Parmesan Perfection!

Flower Power The humble history of the sweet chestnut