A festive favourite - the story of the sweet chestnut from Roman times to today.

“Chestnuts roasting on an open fire…” The opening lyric of ‘The Christmas Song’ immortalised by Nat King Cole’s dulcet tones, which are as smooth and sweet as the sweet chestnut itself, is synonymous with Christmas and all of its traditions. Sweet chestnuts, of course, are an important part of our history – long beyond 20th Century festive melodies, and are, in fact, thought to have been one of the first foods ever to be eaten by humans.

Native to, and widely consumed, across Southern Europe since ancient times (its origins are in ancient Greece), the sweet chestnut has been a staple food (especially in Italy) for millennia; it has been an abundant substitute to cereals, consumed especially in areas where cereals may not grow very well, or when a cereal harvest failed. It may come as a surprise to learn that a sweet chestnut has twice as much starch as a potato, and so throughout history they have been eaten in times of hardship in order to survive. 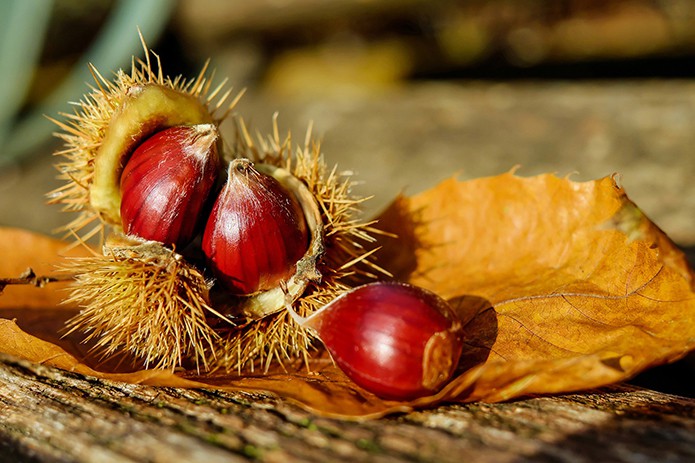 It is a commonly held belief that roasted or ground [into flour] sweet chestnuts were an important part of the Roman diet and Roman soldiers were fed a porridge made from sweet chestnuts before going into battle; because of this the Romans planted sweet chestnut trees across all of conquered Europe, including Britain, in order to feed themselves into perpetuity (they obviously felt pretty confident that they settle in these places considering that it could take as long as 20 years for a sweet chestnut tree to mature and bear fruit!).

Since this time, the sweet chestnut has become an honorary native species to Britain, and as such, a familiarly beautiful and majestic tree, looking perfectly at home as part of the iconic image of British parkland, due to the sweet chestnut becoming a popular landscaping tree, especially in the 18th and 19th centuries, and today it is often in pretty parkland that the oldest and therefore largest specimens can be found. 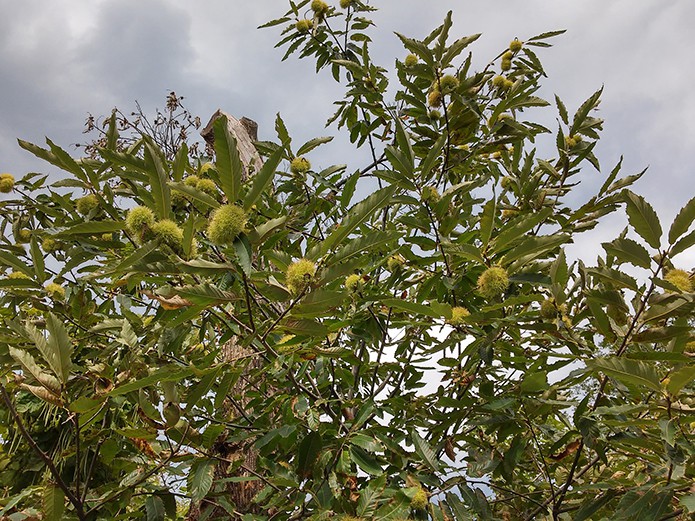 In Italy, the Roman love affair with the sweet chestnut continues as they make the most of this abundant and versatile nut, roasting, boiling and pureeing them to use in both sweet and savoury dishes, and then, once no longer fresh, they are dried out and ground into flour. As soon as the leaves start to fall in autumn, so do the sweet chestnuts, and from October until January many Italian street markets have tables piled high with the gorgeously dark brown and shiny fruit. Due to the warmer climate, the Italian chestnuts are larger than their British cousins, so some of the large sweet chestnuts found in our British Christmas markets in fairs may in fact be ‘castagna’ imported from Italy.

When choosing a sweet chestnut, the perfect specimen should have a shiny tight dark brown skin, and feel firm and weighty, with a little ‘give’ when squeezed. There is nothing better than gathering them from their alien-like spikey pods on a cold frosty autumnal morning, but if that is not an option, sweet chestnuts are readily available to buy in Britain from November onwards. Once brought home, roasting on a fire is traditional, but remember to pare the chestnut with an ‘X’ to prevent exploding chestnuts, allowing, instead, the steam to escape. Wait until the skin begins to open up and peel back to show they are ready – the ‘X’ aids peeling the shell off, which is nigh on impossible when cold, but easier when warm!  Oven roasting is easier, (400 F, 200 C Gas Mark 6), but still one must remember to pare first! 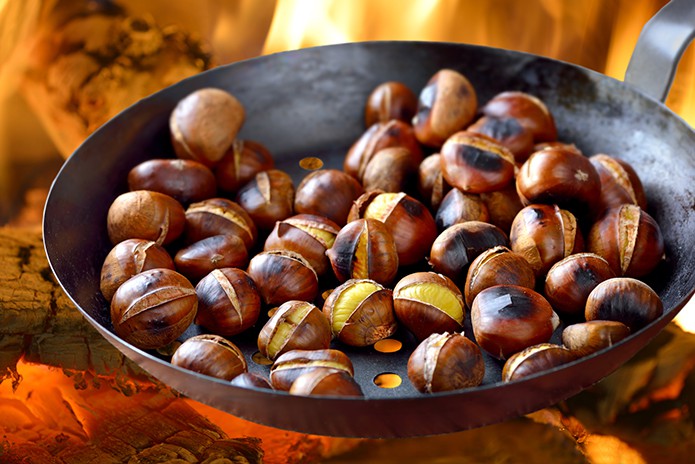 As the Romans realised, and modern day Italians imitate, the humble sweet chestnut has a multitude of uses; from savoury stuffings (perfect for Christmas dinner and are super sprinkled on sprouts), sauces (great with pasta), soups and rustic mashes to sweet dishes, such as ice-cream and chocolate combinations or the simple yet iconic Italian dessert ‘Montebianco’, where chestnut puree is topped with cream to look like its mountain namesake. Italians still use chestnut flour in baking too, for example the Tuscan chestnut cake, which uses the inimitable Italian ingredients of chestnuts, walnuts, olive oil, raisins and rosemary. 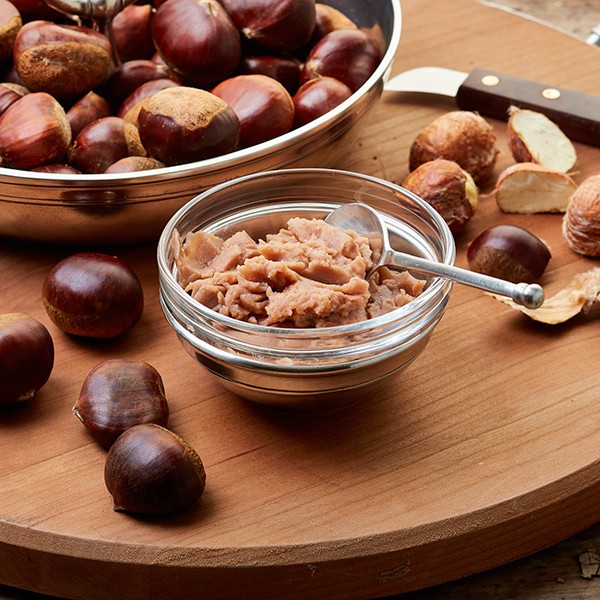 Whether you choose to roast them ‘on an open fire’, or in an oven or boil them, sweet chestnuts should always be cooked, as raw chestnuts contain tannic acid which can cause a stomach upset, however, derivatives of the sweet chestnut have medicinal properties, for example; the leaves and bark can be used to treat stomach upsets, respiratory problems, rheumatism and other aches & pains.

What you need to make Sweet Chestnut puree for dessert dishes…

1. Add all the ingredients to a saucepan and bring to the boil.
2. Reduce the heat and simmer for around 30 minutes, or until tender (most of the water should have been absorbed or have evaporated within this time).
3. Strain the chestnuts, but remember to retain the sugar syrup, and transfer them to a food processor and blend until smooth
4. Add the syrup slowly until the desired consistency is reached.
5. Allow to cool
6. Store in a refrigerator for up to 2 weeks or in a freezer for up to 6 months.