From Witches to Walnuts…

Beyond its gnarly and undisputed glandular appearance within Christmas nut displays in supermarkets, the unassuming walnut has long been prized – the Romans were especially taken with them, calling them Jovis Glans – Jupiter’s nuts – fit for the Gods, whilst mere mortals had to content themselves with acorns instead…

Nocino walnut liqueur, to the uninitiated, is a lesser-known derivative of the humble walnut, and is a viscous dark brown liqueur from the Emilia Romagna region of Northern Italy. In the Middle Ages, monks picked green walnuts in the summer, steeped them in sweetened spirit, traditionally Italian Grappa (but vodka can be used) and then used the resultant dark and sticky liquid for medicinal purposes. This special aromatic spirit has been made both domestically (often individual families have their own special recipe) and commercially (bottled Nocino is typically 40% by volume) ever since.

Walnut liqueur is typically drunk as a digestif after an evening meal, perfect for retiring from the table and overloading the senses with taste, as well as soaking up the warmth, sights, sounds and smells of an open fire. But this liqueur is extremely versatile, so if you would rather linger at the table a little longer, it is perfect with an after-dinner cheese course or with a sweet dessert wine; in fact it can be a dessert itself, as it is delicious poured over ice-cream, sorbet or gelato…

However ultimately consumed, the aromatic bittersweet walnut liqueur should be used to evoke bittersweet memories of long warm days of summer during the short cold days of winter and appeals to our sense of the need for comfort and protection during the darkness of winter. Walnuts have a special place within our consciousness as they are important both in summer folklore and religious traditions. 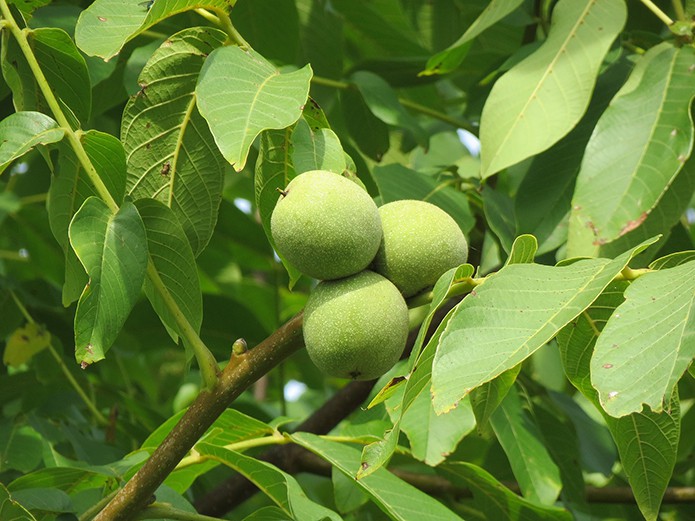 Once such legend is that to produce the very best walnut liqueur barefoot virgins need to gather an uneven amount (23 or 25) of soft, green walnuts wet with dew which should then be left to dry by the embers of the threshing fires that had been used to during the labour intensive process of separating the wheat from the chaff.

Walnut trees were thought to be sacred to witches because of their heroic hardiness – they are able to weather the harshest of extremes, including drought, and yet still survive and bear fruit, which is also linked to their special hermaphrodite qualities, which makes them spookily self-sufficient. A famous Italian legend, dating back to the 13th Century, is ‘The witches of Benevento’, where, women by day would turn into witches by night and congregate under a walnut tree to dance, cast spells and generally wreak havoc and mischief. These legends in part correspond to the times of witch-hunts in the area and the whole history has inspired a culture of folklore retold in literature and ballet. 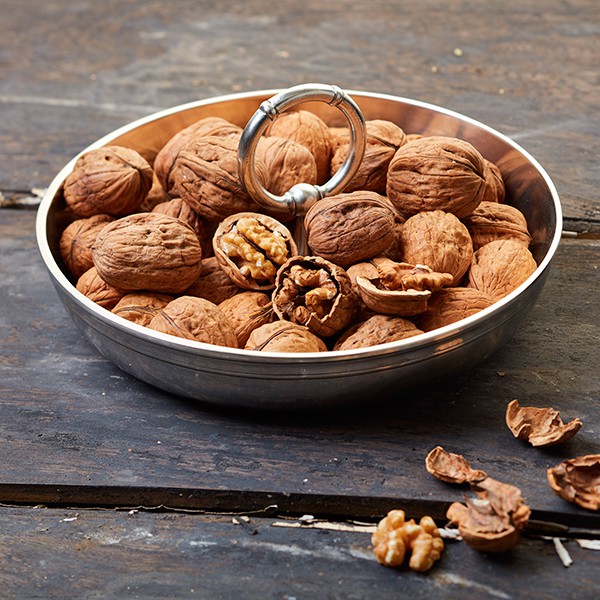 Beyond folklore, the walnuts are green and ready for steeping in late June, and what better day to harvest something that will be enjoyed during the time of year when days are at their shortest, than the summer solstice, when days are at their longest; this is also associated with St John the Baptist’s Day, traditionally marked on 24th June, with further ritualization of celebrating light’s victory over darkness. For the pragmatists amongst us, this time of year is preferred simply because after this date the walnut moth caterpillar emerges and can decimate a walnut crop!

Once steeped in sweetened Grappa (or vodka if preferred) it is advised to leave the walnut liqueur to mellow before you partake, as the young walnuts are notoriously bitter to start with. Once mellowed this drink will ward off evil spirits lurking in the long dark nights of winter and lift your spirits with its warming comfort. Medicinally this syrupy elixir contains plenty of omega oil goodness to ease seasonal sore throats, as well as upset tummies, acne and eczema. 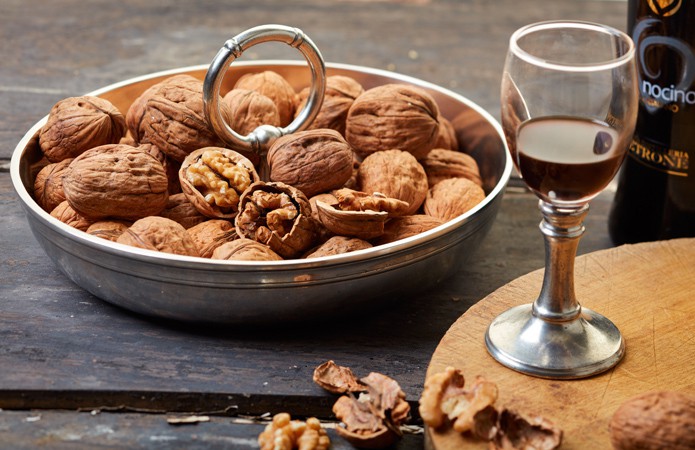 What you need to make your own Walnut Liqueur

30 unripe, green walnuts (early in the season so that they can be cut easily)
2 cinnamon sticks
5 whole cloves
1-inch piece of vanilla pod
zest of one lemon, cut into strips using a vegetable peeler
2 1/2 cups granulated sugar
1 litre grappa (or vodka)

1. Rinse and pat dry the walnuts. Cut them into quarters with a sharp chef’s knife or cleaver.
2. Be careful as the juice from the walnuts will permanently stain anything and everything it touches, so wear gloves while cutting them and wash down the cutting board as soon as you have finished preparing the walnuts
3. Also, be careful as you are cutting them, as if is late in the season when you have picked them, the shells may have begun to harden and cutting through them may be a tricky – mind your fingers!
4. Put everything into a large glass jar, ensuring that the spirit covers the walnuts.
5. Cover and shake to mix well.
6. Store for around 6 weeks, shaking daily – you should notice the colour of the walnut liqueur gets darker and darker.
7. Remove the walnuts and other solids with a slotted spoon and then strain the resultant liquid through layers of muslin into bottles and seal – again, please be careful of staining!
8. Store in a cool dry place and consume within several years, BUT, it is best consumed at least a year after bottling as it can be a little bitter to start with.