Time IN our hands… 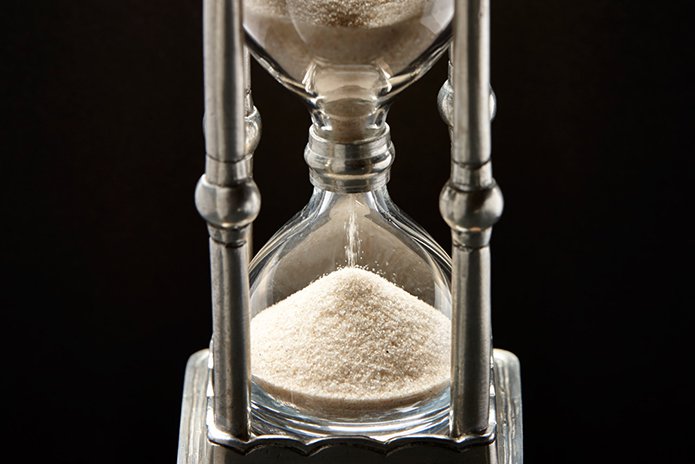 “The more sand that has escaped from the hourglass of our life, the clearer we should see through it.” Jean Paul Sartre.

The humble hourglass, especially a traditional looking one, remains an iconic instrument, and although ancient in concept, still seems to retain a subtle relevance, even in these very digital and virtual of times. Most children are fascinated by the simple mechanics of turning an hourglass on its end and watch the sand trickle through. For adults also, few can resist picking an hourglass up and flipping it, as if for a moment in control of time itself. However we watch the sand all too rapidly trickle away, there can be a momentary feeling of sudden clarity and an unconscious flutter within us of urgency, as we witness the literal passing of time before our very eyes; it seems to ground us, striking a communal chord of the ‘here and now’ and inevitable mortality of us all.

The hourglass derives from sand and water clocks, where the principle of a substance, be it sand or water, moving from one vessel to another at a steady rate can be used to measure time, along with oil lamps and candles; where the steady burning of a fuel enabled time measurement. Water clocks or clepsydra (meaning stealing (clepto) water (hydra)) and sand clocks date back to the very first civilisations; the ancient Chinese, Egyptians, Greeks and Romans all had the resources and resourcefulness to create such instruments. 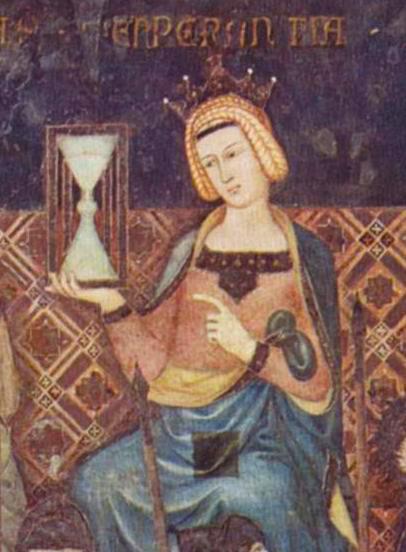 Ambrogio Lorenzetti’s fresco painted between 1337 and 1339 entitled ‘The Allegory of the Good and Bad Government’ features the first known depicted of an hourglass in either art or letters. Image courtesy of Wikimedia Commons

Hourglasses had definitely become more common-place from around the 14th Century, as they were often seen in artwork; painting and frescos at that time, for example. It takes time for an object to be held in popular culture to such a degree that it is represented symbolically, so it is likely that they had been in common use for a while, but it is difficult to date exactly when they started to be used.

Hourglasses have always symbolised scientific knowledge, used to measure both astral and real time. Ownership of an hourglass often signified knowledge and esteem, commanding authority and respect, from the days of the Roman Councils, to medieval men of letters, through to Victorian teachers and ‘men of the cloth’; the hourglass was a key tool as well as a symbol of learning, reflection and accuracy. Throughout history, scientists, physicists, alchemists, engineers and mathematicians, have all used the hourglass to make sense of the world around them; ordering the world, in terms of both conventional and abstract time and space. 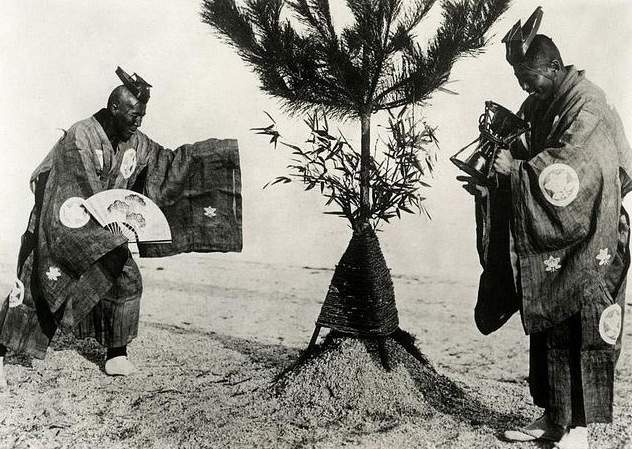 Japanese custom on New Year’s Eve, monks in traditional costumes count the last seconds of the old year with an hourglass and welcome the New Year by honouring fresh green leaves on a bush. Japan, 1932. Image courtesy of Dutch National Archives

A mechanism to measure time, speed and distance was extremely important for shipping, which was ever-increasing in the age of exploration and the development of trade. First mentions of hourglasses on board European ships were in the 1300s. A sand-based mechanism would have been much more reliable than water or pendulum based clocks upon an unstable ship, and as they were inexpensive and simple to run, they became extremely popular.

Ships often had a series of hourglasses that could be turned independently, often the job of the ship’s page – with noon being the reference point for navigation, as this was when the sun was at its highest. Some would mark the quarter and half hour, whilst others marked a whole hour, this way the crew could keep track of time, and the ‘watch glass’ would sound a bell to mark the time. The hourglass was also vital in determining speed. An evenly knotted piece of rope with a woodchip on the end would be floated out from the stern of the ship and an officer would use a small hourglass to measure the time between the knots (between 15 and 30 seconds was the standard measure). The nautical measurement for speed, ‘knots’ came from this procedure. Since then, the hourglass has become somewhat synonymous with the sea, and much nautical symbolism often features the hourglass. Pirates would often have an hourglass on their flags to warn enemy ships that mortality awaits if they chose to attack. 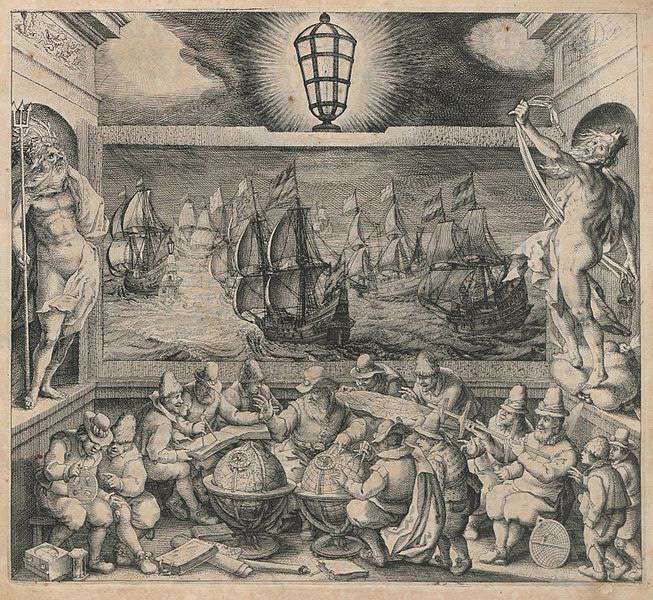 Engraving by Willem Blaeu, dated 1608, for the book Licht der Zeevaert (The Light of Navigation) showing the sciences which made seafaring possible, including globes, maps, compass, astrolabe, divider and in the bottom left hand corner, the hourglass

Hourglasses have long been used to measure time on dry land as well. They were used in the beginnings of industry; early factories used them as timers, especially for metal-working – an hourglass would allow the craftsman to judge when just enough heat had been applied to work the metal properly. Another use for the hourglass was the ‘pulpit-glass’; hourglasses measuring an hour (sometimes two!) were kept on the pulpit to stop the priest going on too long when addressing the congregation. 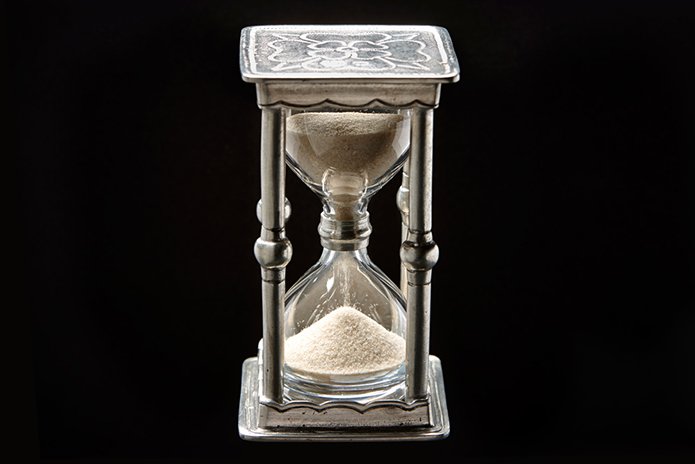 Modern times have seen a decline in the use of hourglasses, as clocks and watches, first mechanical, since the 16th Century, and now digital, have given us convenient, portable and highly accurate time measurement. Yet, to many, they still have their uses, and many households have a modern version or even a reverent reproduction of a traditional ornate hourglass as a means to measure time in specific scenarios. A cook, for example, will often use a 2 and ½ minute hourglass, for the perfect soft- boiled egg, perfect for dunking bread soldiers. 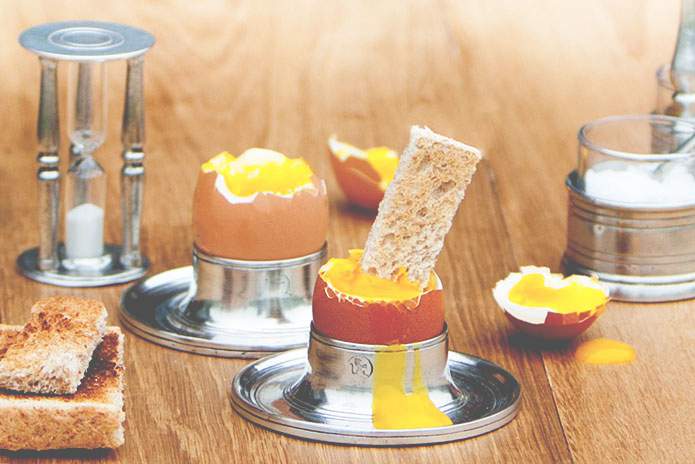 A tea aficionado will use a 3 minute version as the ultimate steeping time for a pot of tea, and many board games use a modern form of hourglass to mark the time of a turn. Some people still use a large 30 minute hourglass for the optimum amount of music practice, and these larger versions are especially useful with young children who have no concept of time, and relate to the literal concept of ‘running out’ of time. And, the hourglass continues to be used symbolically, from the ‘wait’ icon on computer operating systems, a modern interpretation of the age-old hourglass iconography, through to the age-old saying ‘sands of time’ still widely used to signify the fleetingness of time and humankind’s inevitable mortality. 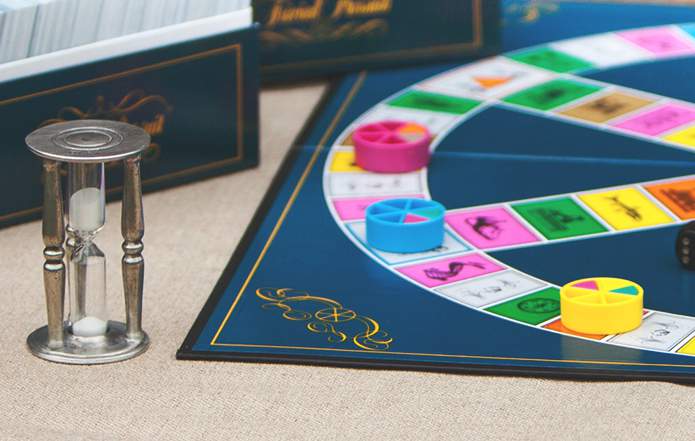 But let us not end on such a sobering note, instead, in these seemingly ‘fast-forward’ of times, a pretty hourglass can elegantly enhance an area in the home for quiet contemplation and calm pursuits. A large hourglass can look classically decorative upon your desk, table or even book-shelf, and, practically speaking, measuring 30 minutes is the perfect excuse for you to spare a few moments to indulge in a good book, your favourite piece of music, hobby, or simply to enjoy the birdsong, view and a cuppa. Go on, turn it over and simply enjoy the moment…