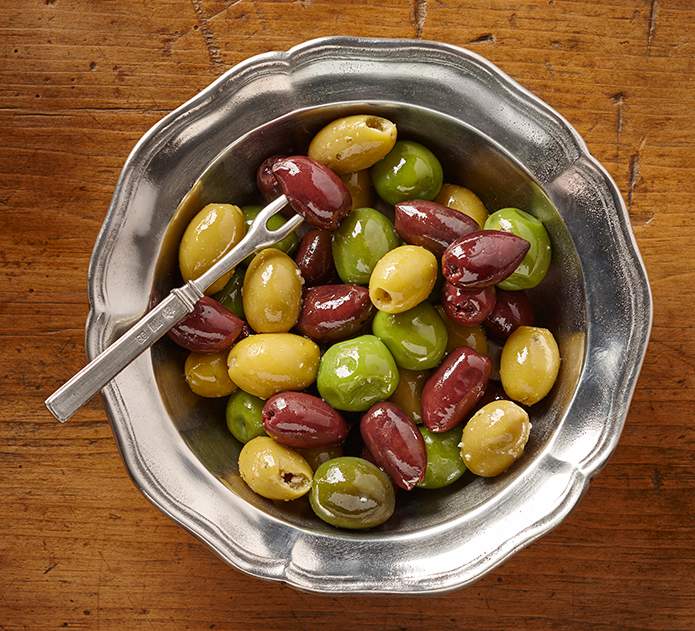 Quintessentially Italian, olives, to the non-Mediterranean among us, can often start off as quite quirky flavours that one has to become accustomed to, but once swayed, forever smitten… well in my case anyway. Tentative tastes, nervous nibbling as a young child, soon gave way to gluttonous gorging. Give me a bowl of olives and an olive fork, if in proper company, or just fingers if alone or among my dearest, and I’ll proceed to decimate the lot within minutes, so if you want me to share, you had better move fast. Not only do they taste beautiful, they look beautiful too – shiny, plump beads, one could almost thread into a natural necklace, if they were allowed to last that long! But olives have been around nearly forever…

Olives are truly ancient, having been cultivated for the last 10,000 years!  Whether pressed into oil, a whole topic in itself – watch this space! – used whole in stews, salads, and antipasto, or crushed into spreads or tapenades, the olive is an extremely versatile ingredient in kitchens from the Mediterranean to the US and Australia… From the warmth salty climate of Syria and Asia Minor hardy gnarly trees have been cultivated over the millenia, branches transplanted and grafted, spreading westwards into the Mediterranean, and beyond, across to subtropical areas of North America, as well as South America.  The climate has to be right; temperate British climates are too unpredictable, and olives trees on patios have sadly come and gone… instead short chilly winters followed by long hot growing seasons are what an olive tree needs. Italy is one of best places to grow olives, and has done for literally thousands of years, and to an Italian the olive tree is somewhat sacred, symbolising vitality, endurance and survival, power that belies its relatively modest and ordinary appearance. Olive trees are often managed to keep them smallish and easy to maintain and harvest. 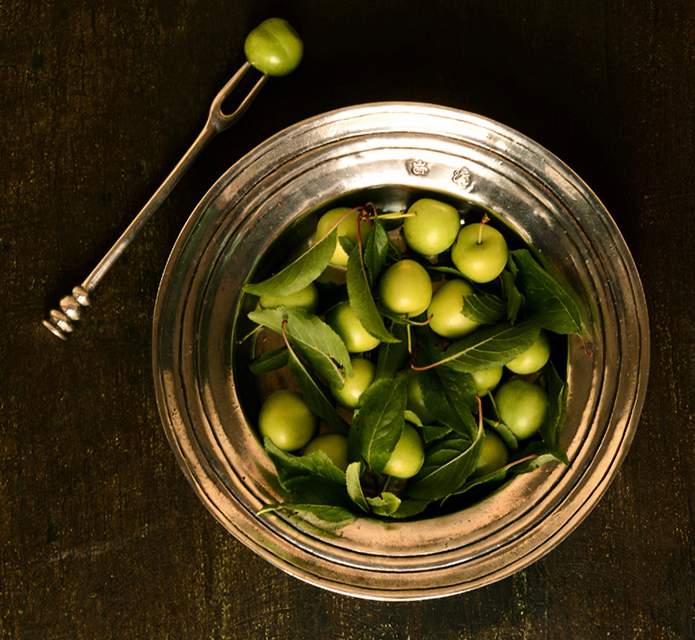 The harvest of an olive is a crucial factor in the resultant quality; if mechanised the quality is lost, as the fruits from the same tree all ripen at different times, resulting in many having to be artificially ripened which compromises the flavour.  If olives are harvested as nature intended, by hand, the quality is retained; olives reach ripeness naturally, and the resultant flavour is richer, yet one pays a premium for such attention to detail.

Olives, like peppers, change colour and flavour according to their ripeness; green olives are harvested first, early Autumn, in the Northern Hemisphere, and are the harder more piquant tasting followed by brown, pink, purple and finally black, which are not picked until the onset of winter (sometimes as late as January), which are soft, rich and mellow.  However, once harvested the olive is far from ready to be eaten… If an olive is eaten un-cured it has the unpalatable bitterness similar to a sloe, another fruit with negligible sugar content. The naturally occurring oleuropein and phenols in olives need to be leached before consumption is in any way pleasant and this is achieved by the ancient art of curing.

Olives can be simply cured either in brine, which gives them the lovely plumped-up smooth skin, or in salt which obviously increases their saltiness and draws moisture resulting in a more wrinkled olive which means that they will keep longer; both can be made ready to be served by marinating in a little olive oil. Lye curing is also popular, especially in large scale commercial enterprises, the alkaline lye is extremely effective in removing the bitter-making compounds, yet can compromise the flavour somewhat. Water, sun and air-curing is also possible, but these methods are extremely time-consuming and labour intensive, and therefore costly and so are extremely rare forms of processing. 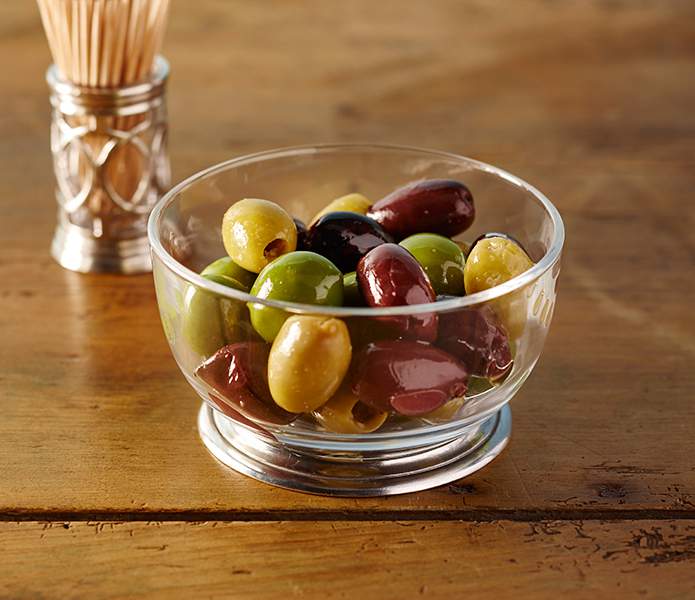 As well as French, Spanish, Moroccan, Tunisian, Turkish, Puruvian and American olives, Italy is known for it varieties and some seen pictured above are:

Gaeta: With a citrus, tart flavour, these can range from purple to black in appearance, and are from the Lazio region. They are usually brined and then stored in olive oil; they are great for simple snacking on or suiting simple spaghetti dishes…
Cerignola: Ranging from yellowy green, purple-red through to black, this olive is a gentle giant; it is often large with a soft, mild flavour. They are brine-cured from Puglia, and are well suited for stuffing with garlic, cheese and anchovies.
Castelvetrano: From Sicily, these beautiful bright green olives look like jewels, and have a mild sweet but salty flavour and a rich texture; they are treated in lye before storing to take away any bitterness. They are also known as Nocellara del Belice and are often served with white wine and sheep’s cheese.

Others famous Italian varieties include:

Baresane: Another mild olive from the Puglian region, these olives are most often brine-cured olives and can be purple through to green in colour.
Saracena: Also called Minuta, for obvious reasons, these little black olives are both brined and cured, and hail from Sicily.
Taggiasca: Sea-side air must give these little red-black olives their distinct flavour, as they hail form ozone-infused coastal Liguria and have a fruity and sweet flavour and are best partnered with local herbs such as rosemary, thyme and bay.

It’s the pits… Most olive lovers would agree that an olive that has been pitted will start to lose flavour – so wherever possible ‘de-pit’ at the last minute… It may be a squash and a squeeze, but de-pitting is easy; many olives, especially black ones, can be simply pinched to squeeze out the pit, otherwise, olives can be squashed under a wide-bladed knife which splits the skin releasing the pits. Really stubborn pits, often within large green olives, can be removed by simply cutting away the flesh in thin slices with a paring knife.

Ultimately, and if in the right company – a relaxed gathering, there is nothing more satisfying than gently biting into an olive savouring the salty moistness and then removing the pit discreetly to the side of one’s plate… however, this does then expose your gluttony if there are dozens of pits piled there!! 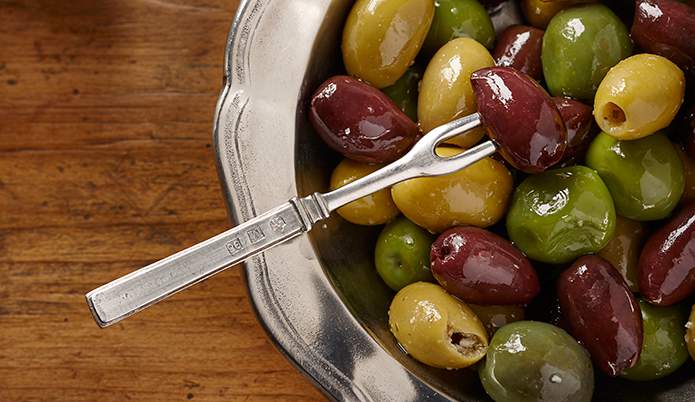