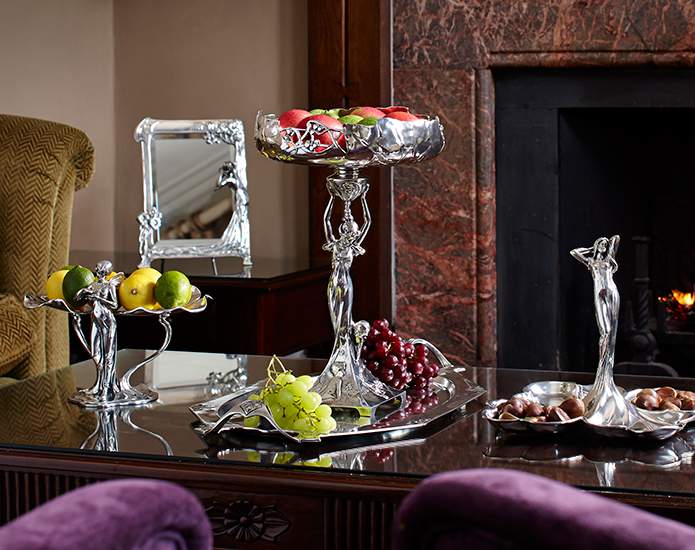 Art Nouveau – “New Art” – emerged around 1890 and lasted until the outbreak of the First World War, completely transforming decorative arts during this period with its distinctive visual look inspired by nature. As an art movement, it was fuelled by brilliant individual artists and designers who longed for change with the 20th Century looming, inspired by diverse influences such as Arts and Crafts Movement, Rococo and Symbolism, and the art of ancient and exotic cultures such as Japanese, Celtic and Byzantine. It broke with established traditions of imitative historicism and the increased dependence on mass-produced items, and offered exciting new forms of expression, not just in metalwork, although the stylised art form was particularly well-suited to the reflective and malleable metals and alloys such as pewter and silver, but in all aspects of life including furniture, ceramics, architecture, fabrics, glass, painting, wallpapers, sculpture and jewellery. Art Nouveau was seen as a total immersion of life in style. 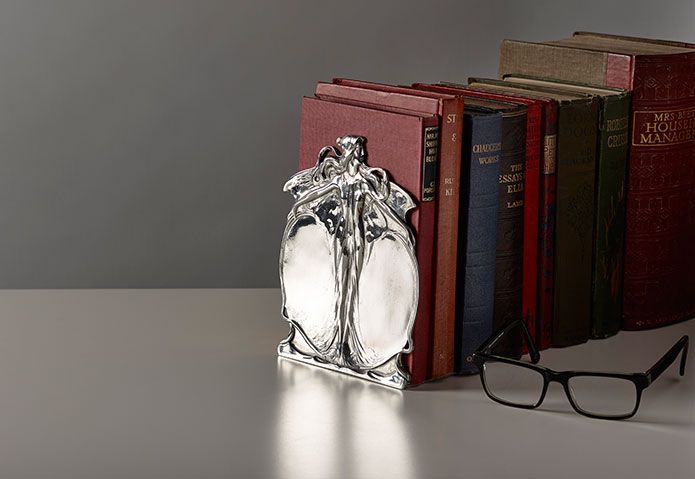 Art Nouveau was an international style, interpreted in different ways by different artists and designers reflecting the individual character of each country – Jugendstil in Germany, Secession in Austria, Stile Liberty in Italy, and so on – but they were all variations on a theme; all inspired by the natural world. Two main strands developed within Art Nouveau – the sinuous, flowing, and asymmetrical compositions with undulating energy-laden movement and whiplash curves, featuring leaves, stems and flowers, and lyrical maidens with long, flowing hair for example, and the formal abstract interpretation of nature, with its simple, linear and geometric shapes and patterns. 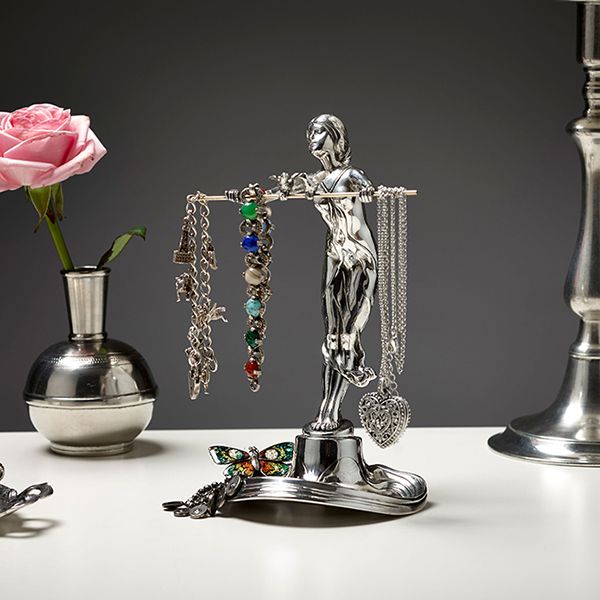 As the popularity for Art Nouveau started to wane – what was once fresh began to become repetitive – it was the more geometric strand – particularly popular in Germany and Austria – that endured, forming the foundations of both Art Deco and Modernism. 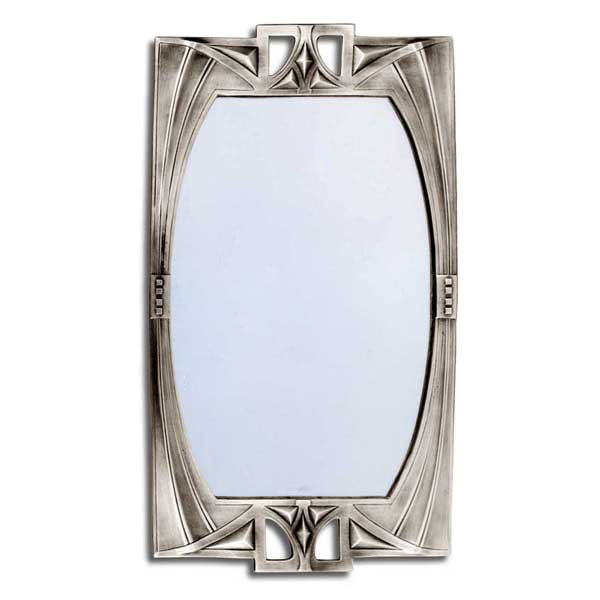 Although the Art Nouveau movement was short-lived, it has left an amazing imprint on art and design, and Art Nouveau decorative ware remains highly desirable and collectible. Whilst many of the original pieces created by the masters of the period are prohibitively expensive, it is still possible to enjoy the elegant pieces, and reverent reproductions can be collected on a more modest budget. Art Nouveau-style pieces manufactured today by Cosi Tabellini are hand-made in Britannia Metal, a pewter-type alloy favoured for its silvery appearance and smooth surface, and commonly used during the Art Nouveau period. 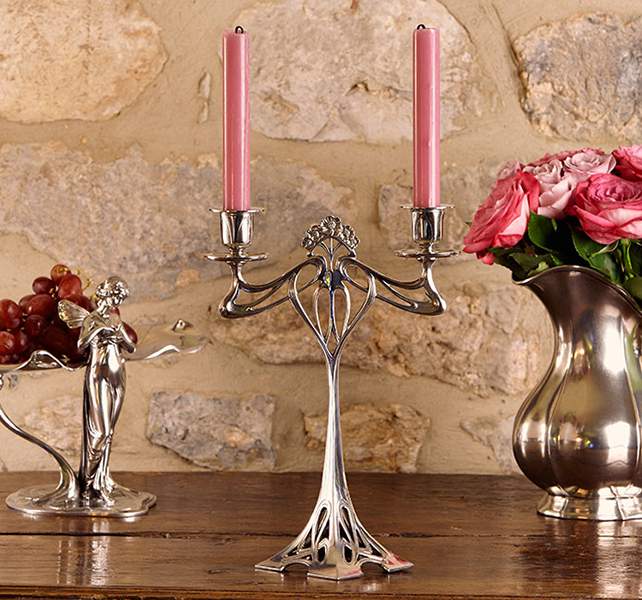 Cosi Tabellini has been heavily influenced by the Art Nouveau movement and many of the Art Nouveau-style works created by Cosi Tabellini are reproductions of iconic pieces created by the famous German company WMF (Württembergische Metallwarenfabrik), a tableware manufacturer founded in 1853 in the Württemberg region of Germany by Daniel Straub and the Schweizer brothers. Around 1900 they were the world’s largest producer and exporter of household metalware, mainly in the Jugendstil, or Art Nouveau, style, and produced some of the most exquisite and evocative pewter and silver-plated ware of the genre, including both sinuous and flowing patterns favoured by French and Belgian designers, and the more restrained geometric and abstract designs favoured by Austrian Secessionist designers. 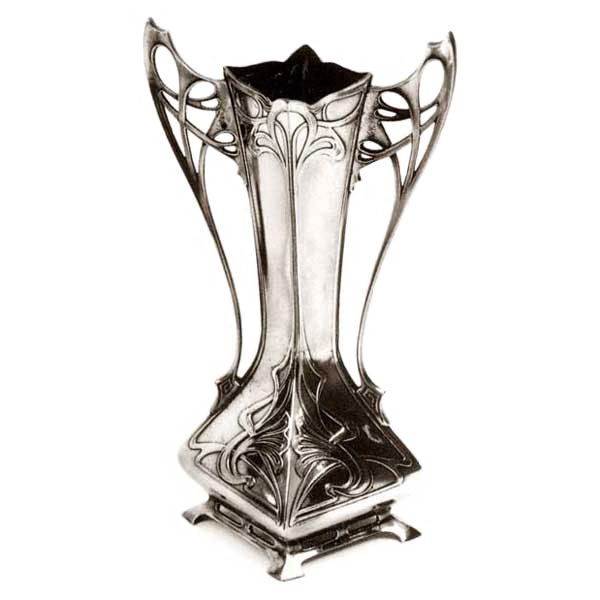 They are best known for the period of Albert Mayer, sculptor and designer, who was director of the WMF Art Studio from 1884 to 1914, and who drew on the forms and designs created by leading artists and designers working in modern and forward-looking arts centres of the day such as Darmstadt and Munich. Mayer was well known for incorporating into his designs the femmes-fleur – female figures with billowing hair, and beautiful maidens and nymphs with flowing hair and graceful postures. 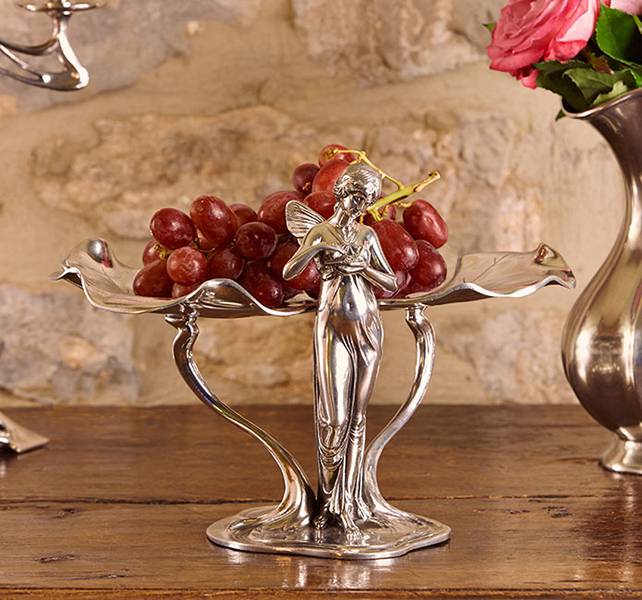 Cosi Tabellini has also taken inspiration from Art Nouveau in the form of their range of jewellery, working in collaboration with the designer Aida Apostol. Innovative jewellery design flourished during the Art Nouveau era, whereby imagination and fine craftsmanship became more important than indiscriminate and indulgent use of super-expensive traditional materials, such as diamonds, rubies and emeralds, or, at the other end of the scale, more important than simply churning out poor quality mass-produced costume jewellery. So, instead of undistinctive and uninspired shows of ostentation, or cheap, churned out factory-produced items for the masses, more inexpensive materials and semiprecious stones like enamel, pewter and silver, moonstone, opal and turquoise started to be used by jewellery makers, creating artistic, dynamic, modern and high quality interpretations of the decorative art, using nature especially as inspiration. 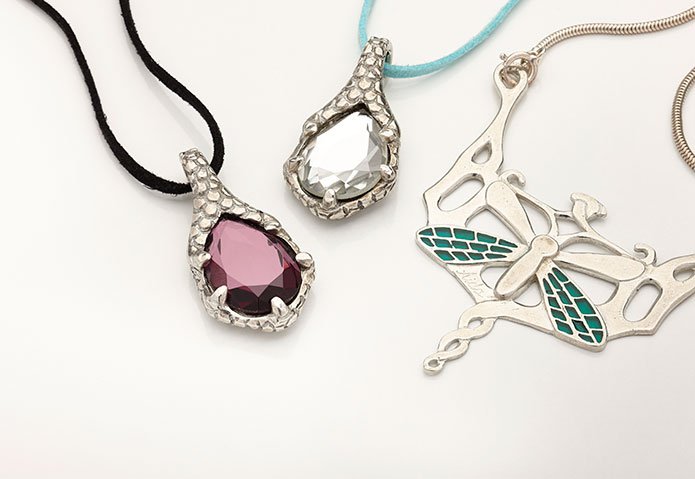