Glamour in a Glass

Spotlight on the iconic Martini glass. 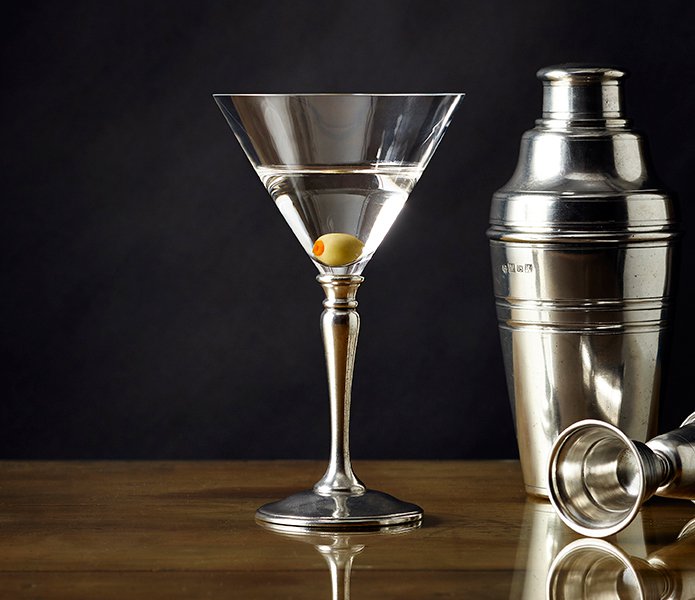 When one hears the word Martini or even Cocktail, how many of us immediately see the classic Martini glass in our mind’s eye..? The classically shaped vessel cries cocktail, screams style and the clamour of glamour.  The world famous drink of Martini in an iconic Martini glass is the cocktail of choice for gin and vodka lovers alike. Gin is favoured by many within a Martini, as the juniper flavour within the gin complements the Italian or French vermouth perfectly, yet Fleming’s Bond has at the same time immortalised the mixture of vodka and dry vermouth on the silver screen over the last 6 decades with his preference for a Martini – ‘shaken, not stirred’. Some say stirring is the only way to serve a Martini, as shaking bruises the spirits, however, Bond must enjoy the cloudiness resulting in vigorous shaking, where the shards of ice become suspended in the drink, either way making for a refreshing tipple.

It is said that the Martini drink was invented in late 19th Century United States, when a San Franciscan bartender, Jerry Thomas, was asked to make a special drink for a patron passing through on his way to the gold-mining town of Martinez – is there anyone still around to dispute this? If we are in legend territory, let us explain the distinctive Martini glass.

There is a suitably hazy school of thought that the Martini glass was invented during the Prohibition, when gin, and therefore Martini, was popular in the illegal drinking venues known as speakeasies, presumably because after over-consumption you spoke too easily, if a little slurred and incoherent. It is thought that the classic shape of the Martini glass, with its wide rim on top of a teetering stem was so designed as, paradoxically for good glass function, it is extremely easy to knock over. The precariously proportioned glass, can, in a panic, if the premises were raided, simply be nudged to be tipped over, losing all traces of alcohol in an instant, and thus absolving the drinker of any crime. Fortunately these days we’re allowed to consume alcohol without fear of prohibition (over 18s only, of course, and drivers excepted…), as I can’t imagine many of us could contemplate wasting such a delicious drink… 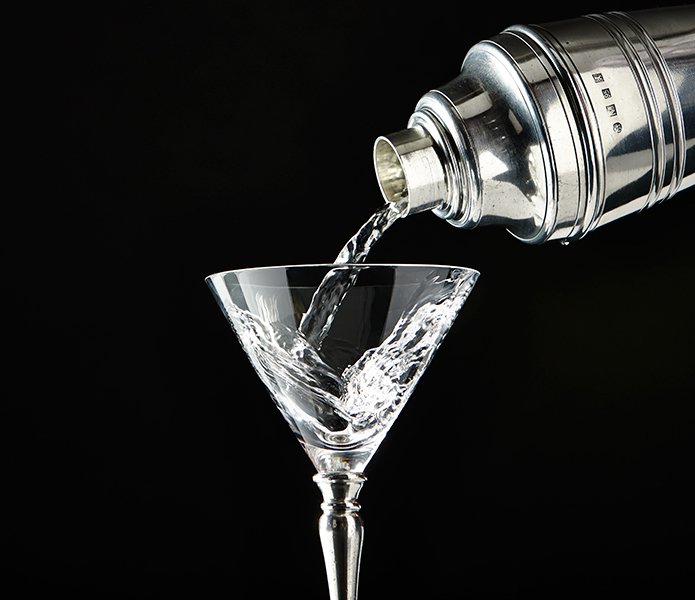 Whether your Martini is made with vodka or the more traditional gin – solo, with olive or a twist, shaken or stirred – this iconic drink deserves an equally iconic vessel, and the style of glass actually pre-dates the drink itself.

The similarly shaped generic cocktail glass has been around long before the Martini gained its popularity, albeit a slightly smaller and more rounded version, with a thinner rim. The classic shape of the cocktail glass is aesthetic and yet also functional.  The long stem meant the liquid was kept nowhere near the warmth of the hands in order to retain the ‘chilledness’ of the liquid without the necessity of ice, and the amendments in design to create the Martini glass, again was a matter of function.

The elongated stem, again keeps the drink suitably chilled without the need for ice, and the straightened sides prevents the drink from separating as a standard cylindrical-shaped glass does, whereby the alcohol settles on the top. The widened mouth enhances the taste and smell of the drink, by opening up the spirit, especially the aromatics of a gin mixture. And some would say, as an aside, the conical shape allows the display of the garnish, the classic green olive in the case of the classic Martini, which further enhances this iconic drink and glassware.

Of course, the iconic glass should not be restricted to Martinis – other classic cocktails served such as Manhattans and Cosmopolitans can be served authentically in this gorgeous glass.