Pewter – For The Perfect Ten 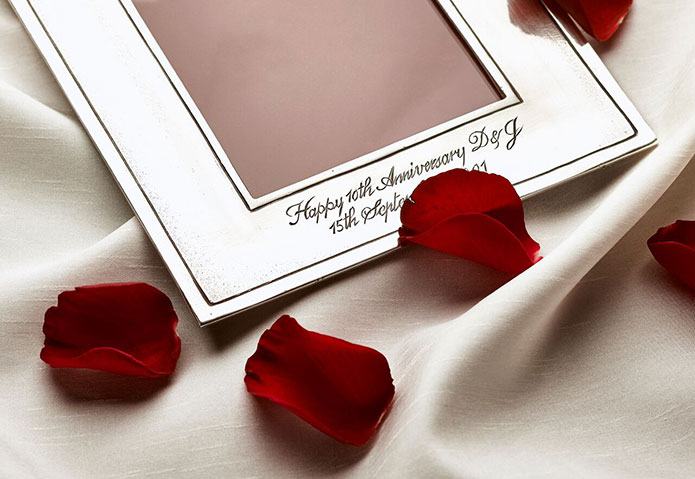 The union of two people in love is a cause for celebration, whether official or otherwise, religious or relaxed, and most often, across the cultures of the world, the ‘marriage’ of the couple is celebrated among family and friends in the form of a ‘coming-together’ ceremony, most often termed a marriage or wedding. That special date is then marked, remembered and commemorated with each passing year, celebrating the anniversary of the union and the continued unison of the two.

The honouring of a wedding anniversary dates as far back as the Holy Roman Empire, when wives were given silver and golden garlands by their husbands to celebrate 25 and 50 years of marriage. As commercialism has grown during the 20th Century, it has become traditional to mark every year of a marriage, with each year being represented pretty much with a universally recognised gift, beyond the traditional silver and gold.

The first milestone, some would say, before the traditional big-guns of 25 + years, is the 10th wedding anniversary. A decade, a round ten, is a respected time-frame, and should be celebrated accordingly. The universal gift of 10 years of marriage is Tin. This can be no accident, as Tin is a modest metal, with no affectations, airs or graces, but is invaluable due to its malleability, ductility, resistance to corrosion and its protective nature. In other words it will bend and adapt when either stretched or pressured, it can bend and transform without fracturing, it is not easily tainted or ruined and is often used to shield and cushion another – surely the prime ingredients of a strong and happy marriage.

Tin is a little tricky, however, to buy in gift form.  One strategy would be to purchase something that is made up predominantly of Tin, and therefore symbolically encapsulate all its redeeming features, yet with a little something extra, to transform Tin from the utilitarian to the aesthetic. The solution is a pewter-based gift. Pewter is made up mainly of Tin – good quality pewter is approximately 95% Tin – so is malleable, ductile and stable, yet the addition of a little copper and antimony creates a metal of pretty durability as well as practicality, style as well as substance, fun as well as function, which is what all marriages should be made up of too…