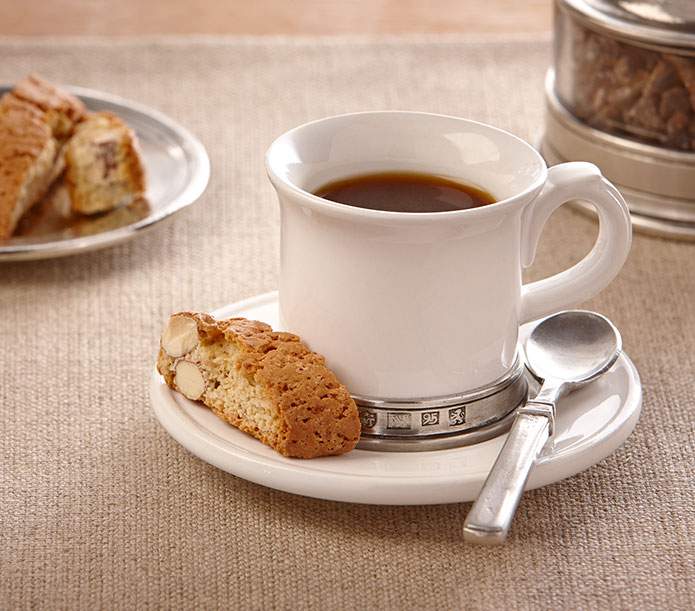 ‘Pressing’ flavour from the coffee at high speed is thought to be the meaning behind the word ‘espresso’, ‘expres’ and ‘express’ in Italian, France and English respectively. Espresso is both a type of coffee and a brewing method; forcing a small amount of nearly boiling water under pressure through finely ground compacted coffee beans, creating a thick, creamy textured concentrated beverage with a head (called crema – this is the science bit – emulsified oils forming a colloid ), highly flavoured and caffeine rich, known as Espresso. 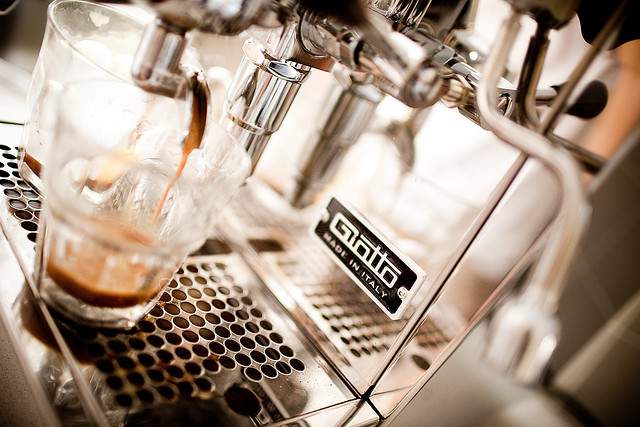 Espresso-type machines were first developed in late 19th Century Italy, with the most notable being Moriondo’s Italian patent, registered in Turin in 1884, seen to control the supply of the steam and water through the coffees. However, these machines only brewed coffee in bulk, not “expressly” for the individual customer like the espresso machines we are used to today.

The first recognisable espresso machine was patented in Milan, by Bezzera, at the turn of the century, and after 50 or so years of refinement, a higher pressure and finer grind could be achieved. During the 1950s Italy moved away from its rural roots transforming itself into an urban society and city caffè bars became prolific with coffee drinking becoming the norm within the routine of the working day, often on the journey to work.

Elsewhere, the espresso was gaining popularity, especially expatriate Italian espresso bars, serving the working class Italians having migrated for opportunity and a better life to North America, for example New York’s Little Italy. These establishments were often in the ‘ghettos’ that large scale migration often produces, and the somewhat ‘downmarket’ establishments provided an ‘alternative sub/counter culture’ appeal. In the 1950s and 1960s Britain, espresso grew in popularity among the younger generation who were able to use cafes and coffee shops as focal points to socialise rather than in public houses, as they were not old enough to drink.

As international tourism developed, espresso was seen as a specialty coffee, and from the 1980s especially, an indigenous artisanal coffee culture developed (although this ‘coffee conniosseurism’ had started in the 1970s and even 1960s), which has continued today, with espresso becoming positioned as an upmarket drink, known as ‘third wave coffee’, as opposed to ‘second wave coffee’, a mid-market drink most often found in large chain coffee houses all around the world. 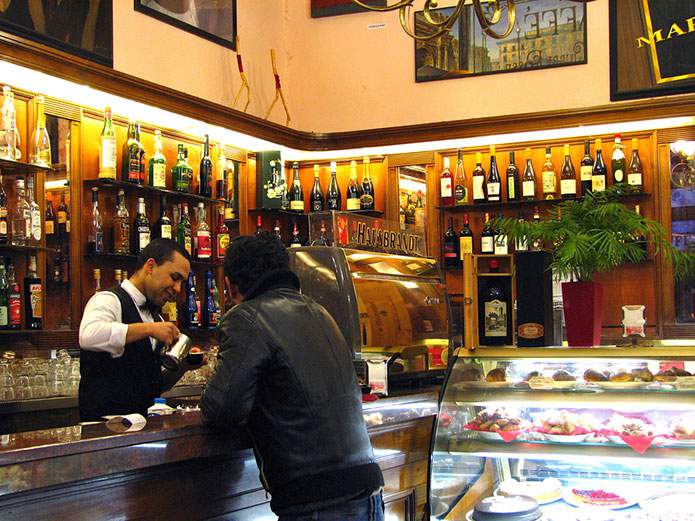 We still say ‘pull’ a shot, meaning the handle activating the piston on traditional machines, notably Gaggia, but today the all important steam pressure (around 9 atmospheres) is achieved by less romantic means of an electric pump. Many people own domestic espresso machines these days, or at the very least the charmingly simple stove-top vessel – Brikka from Bialetti is the best make. But, due to the specialist equipment required, drinking ‘proper’ espresso coffee is, essentially, a social experience. 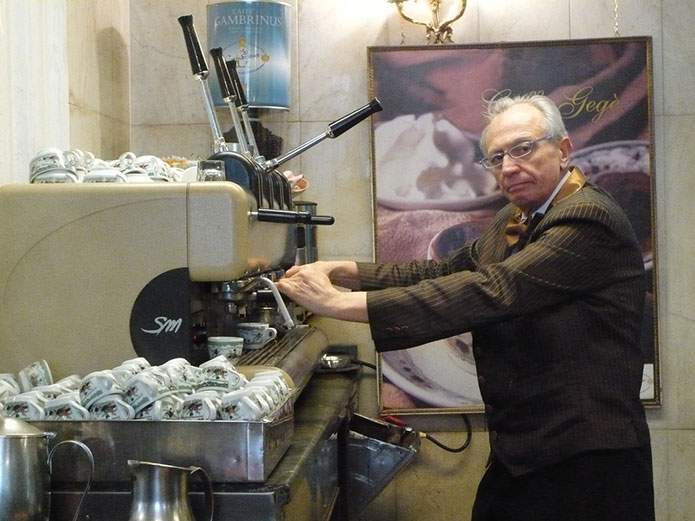 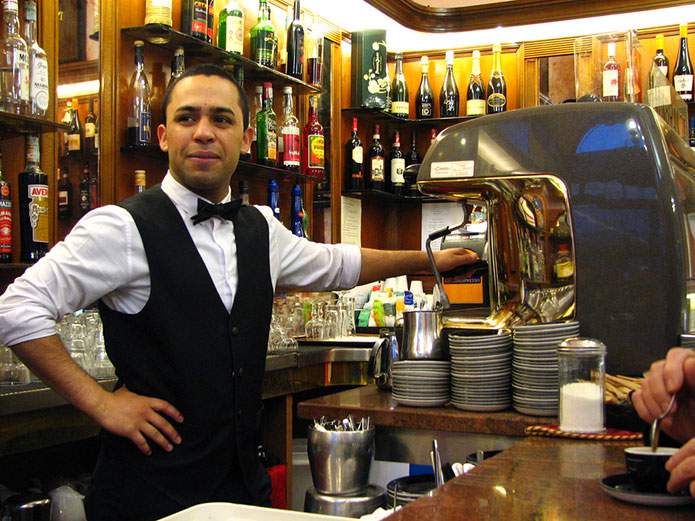 Italians take their espressos very seriously, traditionally drinking 1-2 Espressos during the day, often after a meal, as the caffeine will kick-start digestion, necessary after a traditional Italian lunch (4-courses), stopping you from wanting to nap after. There is an Italian Espresso National Institute (INEI), which has outlined the parameters under which a genuine espresso can be produced; including amount of ground coffee, water temperature and pressure and percolation time all having stipulated measurements, and there are three distinct types of traditional espresso, depending on size and length; Normale – 30ml is a single shot (7-8g of coffee), ‘doppio’ (double the amounts) and ‘triplo’ (triple the calculation). Original lever machines could only pull a single shot, however a double is the standard shot these days. It is also the norm in Italy to have sweetened espresso as standard – you have to ask to skip the sugar, rather than ask for it… 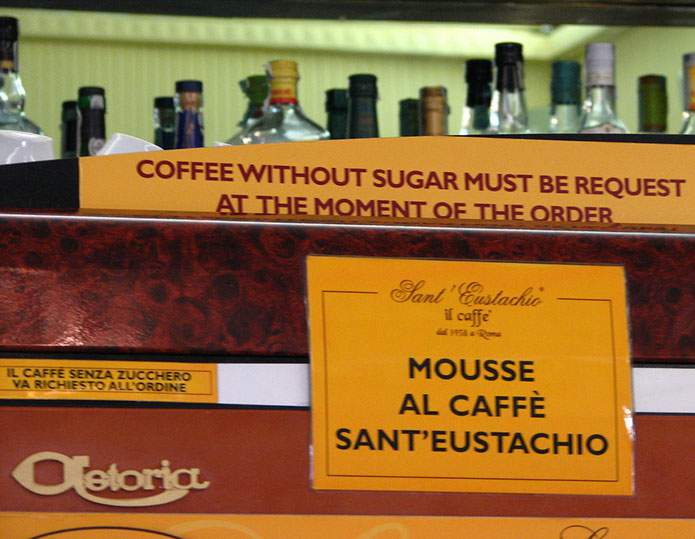 Italians tend use locally roasted beans, imported from Africa, Asia and Latin America, especially Brazil, roasted slowly at a lowish temperature in a Drum machine. Differences in the grind of the beans and extraction (length of time under pressure) creates the other less common / more specialist espressos, such as Ristretto, with its finer grind of beans, less water, therefore a ‘shorter’ shot (15 – 20 ml) resulting in a quick caffeine hit, and Lungo (Italian for long) with more water and a longer pull, a coarser grind of beans, resulting in a longer, bitter drink (90 ml).

Some coffee houses only offer a standardized shot (size and length) – only varying the number of shots in espresso-based drinks such as lattes. In more specialist establishments, the filter basket size is varied to accommodate choices of single, double or triple espressos. It is less common to see an establishment altering the grind, as it is the fine tuning of the grind that is paramount in consistent quality espresso making, so changing the grind from normale to ristretto or lungo requires changing the grind, and cannot easily be accommodated in a busy caffè.

There is, therefore an exact science to espresso making; aficionados have strict criteria similar to the INEI’s, which is hard to perfect on a home machine, due especially to inconsistencies in temperature. However, with trial and error, you can easily make your own espresso at home – use a whole-bean espresso blend and coarsely grind the beans just beforehand to enjoy a fresh tasting coffee – otherwise buy pre-ground blend. A single espresso is 2 oz; it is important to follow this measure, and serve in small espresso cups. 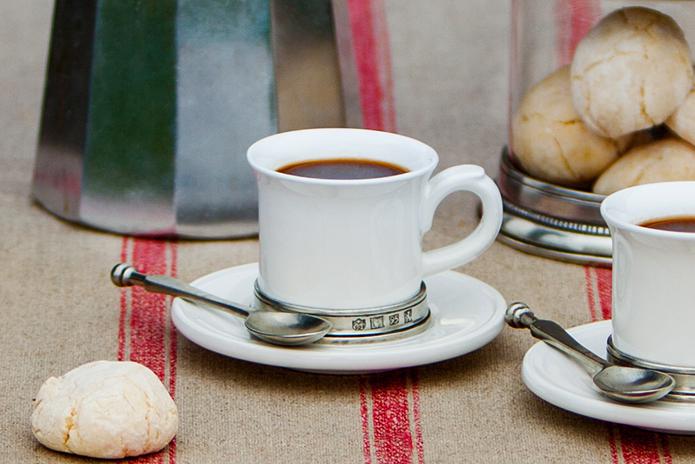 Espresso cups need to be plain white to accentuate the richness in colour of the coffee, thickened bottom, to maintain the heat of the coffee – with an elliptical bottom to allow the oils and fibres of the blend to emerge without bubbles – and have a thinnish rim to allow a refined sensation when sipping. These little vessels are aesthetic to behold as well as being practical.

Espresso is the basis for all these other coffees, which would not exist without it. Try these variants at home to become a true coffee connoisseur…

Americano – A Cappuccino cup is 2/3rds filled with hot water, then a doppio is run into the cup – producing a full favoured tangy drink
Macchiato – translated as stained or marked – one shot espresso with a dash of milk or froth added. If froth is carefully placed into the centre of the espresso – the milk will separate and form a layer on top of the espresso beneath the foam. Served in a small glass or espresso cup (35-40ml). Modern versions use one or two shots with same amount of milk as water – 60 or 120ml
Cortado – one shot of espresso with 1:1 – water:milk (60ml), little foam
Galão – one shot with 1:3 – water: milk (120ml), little foam
Flat white – one or two shots (30 or 60 ml), with 1:4 or 2:3 – water: milk creating a 150ml drink
Cappuccino – one or two shots of espresso and steamed milk (full fat) should be frothed to 60C, giving a pouring temperature of 65-70C – full of fine densely packed bubbles – pouring creates a slight dome, then the milk will ‘fall out’ of the foam to produce the right balance of milk and espresso in the cup – the most popular espresso-based coffee drink. Served in cappuccino cup (150-180ml)- top with shaved chocolate, raw sugar, cinnamon, or other spices
Caffe latte – very similar to cappuccino, one or two shots of espresso with steamed milk added as much as 1:3-1:9 water: milk poured carefully to create 1 cm head of foam. Served in a glass (240-600ml)
Caffe Mocha – espresso and 10g of chocolate powder with steamed milk. Poured very carefully in Cappuccino cup so only the milk is added – true mochas only have a very thin layer of crema – dust lightly with chocolate powder.